(Right now I'm not sure who's in charge of writing these, which probably means for now it's me.  But what the hell -- first place!) 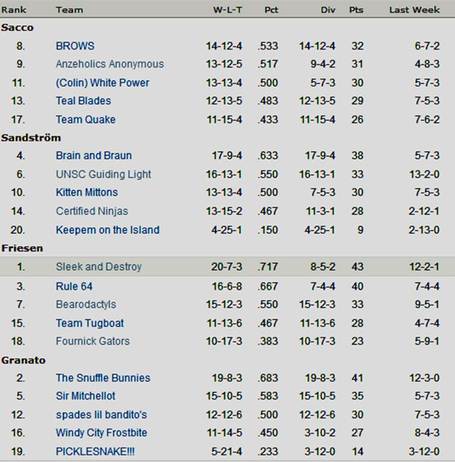 Kitten Mittons vs. Brain and Braun

LVP: Jose Theodore and Johan Hedberg only combined to win one of their five starts this week.  Man, backups can really bite you in the ass.

This was a pretty close match-up that could have gone either way.  Brain and Braun took most of the skater categories, but Kitten Mittons' better backups stole the week.

LVP: The Islanders' Matt Moulson took one shot-on-goal and was a -3.  Shots on goal was one offensive category that Niecy/Grace lost on the week.

Sir Mitchellot leads the league in faceoff wins, and added another 99 this week.  I suspect they are cheating in the circle somehow.

MVP: Jonathan Quick had a pretty good week (I kid -- it was literally the best goalie week in the history of fantasy hockey).  I even benched him after two shutouts just as a mercy tactic.

LVP: Toronto defenseman Cody Franson contributed one shot on goal and a -4 for the week.

I'm in first place, but man -- goaltending has been absurdly excellent with Quick, Lehtonen, and Bobrovsky.  I have yet to record a regulation loss this season!

MVP: Sure Carey Price and James Reimer only combined for one win on the week.  But they get the MVP just for not being nearly so awful as...

Goaltending swings another match-up, though this was sort of a battle of whose goalies could avoid being the absolute worst.

MVP: Antti Niemi and Craig Anderson combined to win 4 of 5 starts.  The waiver wire pickup is starting to pay off.

I hate to keep highlighting goaltending, but it seems they decided a lot of Week 2 match-ups.  Skaters have more overall categories each week, but they are less interrelated and have some tendency to wash.  It's hard to win one goaltending category without winning a couple of them, though.

Keepem on the Island vs. UNSC Guiding Light

MVP: Tomas Vanek scored 3 goals for UNSC Guiding Light, which sadly matched the team total for Keepem on the Island.

LVP: Bench management and/or luck.  Keepem on the Island had the following players not play a game this week: Milan Michalek, Erik Cole, Jason Pominville, and Ryan Whitney.  It was a shorthanded effort, and that cost him a lot of categories.

There are signs of life from Keepem on the Island, though -- five players dropped and three players added last night!.

LVP: Jaroslav Halak lost the one game he started badly -- a 5.94 GAA and a .778 sv%.  Those numbers were so rotten that Evgeni Nabokov was able to win those categories by himself.

Just like the L.A. Kings, Teal Blades seems to be getting along fine despite an early-season injury to Drew Doughty.

PICKLESNAKE!!! vs. The Snuffle Bunnies

I can imagine the tone of Meg's letters to his fantasy players is getting a LITTLE MORE URGENT, GUYS!!!

MVP: Team Quake has seen a lot of player turnover, but Phil Kessel continues to be an early-season offensive star.  3 goals and 3 assists for the week.

LVP: Evgeni Malkin was injured enough not to play games but healthy enough to avoid IR status, and the Blues' Chris Stewart had zero points and was a -4.  BROWS lost the plus-minus category by 4.

Quisp leads the league in player transactions -- Team Quake has made 16 moves and the next highest team has made 6.  If only Dean Lombardi were that active.  :).

MVP: Tough to say -- Rule 64 won the offensive categories through a committee approach.  No player had more than three points, but every forward not named Steve Downie had at least one point.

LVP: Not sure why Wayne Simmonds was benched -- was Rudy trying to send a message to his team?  Or to the league?

There was a nice symmetry to this goaltending matchup: each team had 5 starts, 3 wins, and 2 losses.  Rudy got the edge in the rest of the goalie stats, though.

So who want to write next week's write-up?  Bidding starts at zero dollars.  :)