The season starts this week, and it's going to be a good one.

Expectations are high for the Sharks this year, and they are going to deliver. Read on for a breakdown of some of the things about this team that are cool, great, and awesome, as well as predictions for the new season.

The top line for the Sharks this year will be Patrick Marleau - Joe Thornton - Joe Pavelski. I was a bit skeptical about this configuration early in the off-season, but after seeing a bit of these three together in the pre-season I'm fully on board. This line is awesome!

Thornton and Marleau have been working well together on the same line off-and-on for years now, so there's no question about what they can do. Adding Pavelski gives the line a) yet another natural center who can take face-offs b) a speedy guy with a quick shot. So really it doesn't add anything new to the line per se, but embraces the philosophy that "if something is good, why not have more of it?" Joe Thornton will now have two speedy wingers with quick snap shots to pass to, which will turn out very well for everyone.

I predict a huge comeback year for Joe Thornton after a bit of a dip last season, and I also expect Joe Pavelski to reach new career highs in just about everything. Patrick Marleau will continue to be the amazing player he is every season, and all three guys will be all-stars. The only thing the line is missing is a nickname, so here you go: The MarJoe Line. You're welcome.

Sophomore slumps are for losers. Logan Couture won't have anything to do with that garbage.

What usually happens with a "sophomore slump" is that it takes a season or so for other teams to really recognize a young player as a threat and learn how to defend against him. When the new season come around and the young guy gets put on a top line and faces top defensemen who are actually looking to shut him down, his production dips.

Logan Couture was already a target for other team's defenses last season, especially late in the regular season and the playoffs, so we know what we can expect from him when the minutes get tough. He will also be the beneficiary of playing in the shadow of the Sharks' super-dangerous top line again this season, which means that teams will rarely put out their best shut-down guys against the Clowe - Couture - Havlat line. This should be another year of improvement for Couture - expect his point totals to jump way up from last season.

Ryane Clowe is a mean old grouch who loves playing with Logan Couture. The two have found a lot of chemistry together and it's a thing of beauty. Martin Havlat is the question mark on the line,  but as long as he can stay healthy his speed and shot will be a big asset. The second line should rival the top line in terms of scoring this season, giving opposing teams fits as they try to figure out who they need to worry about more.

As much as I was hoping Benn "Keanu" Ferriero would make the team this season, the Sharks have a somewhat surprising over-abundance of talented guys coming out of the pre-season. It's a good problem to have. The team is expected to keep Brad Winchester, tough guy/porn superstar, on the fourth line with Andrew "Not Douglas" Murray and Andrew "Not Murray" Desjardins. This line was a lot of fun in pre-season games, and could be a real pain in the butt for the opposition.

The third line looks pretty good as well, with Handzus and Mitchell joined by third grade spelling bee champion Tommy Wingels. Wingels has been on a tear in the pre-season, and I for one expect it to continue all year long.

You heard it here first folks: Tommy Wingels for Calder. 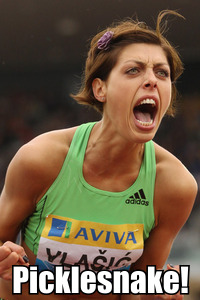 Do we need more words? I don't think so.

Thomas Greiss will be asked to step up early in the season, with Antero Niittymaki out at least two months following surgery and Antti Niemi still recovering from some sort of cyst-ectomy. Niemi may be ready to go on opening day, but it would be foolish to push him too hard too quickly. Greiss will finally get a few starts and a chance to prove that the Sharks made a mistake when they didn't give him a full-time job a year ago.

I believe that Greiss has the talent to be a quality NHL goaltender, and I think Antero Niittymaki might be encouraged to take ALL the time he needs to come back to the team.

I hope I don't sound cocky when I say this, but...what do you call it when a team wins the Cup seven times in a row?

I'm just saying - we might need to figure out what that's called, if the Sharks turn out to be anywhere near as awesome in real life as they are in my head.