Anaheim Ducks (5-4-1) at Columbus Blue Jackets (1-9-1), 3:30 pm
Anaheim Calling and The Cannon -- Somebody's getting fired in Columbus, and it probably isn't just the cannon.

In honor of the way the Ducks started yesterday's game, I'm going to attempt a team-inspired creative challenge.  Let's see if I can draw a gameday cartoon in the 14 seconds it took Anaheim to surrender the opening goal.  Ready?  Go! 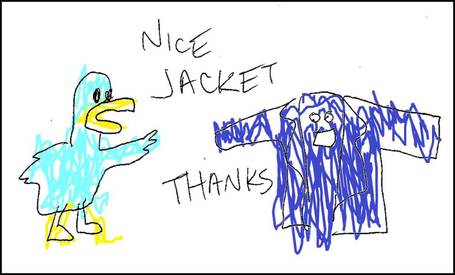 Prediction: I suppose I should put in some comforting line here about how the Ducks have as many points on this road trip as the Blue Jackets have on the season, but Anaheim LOVES losing to teams that cannot buy themselves wins.  Ducks lose by one or three or something, and afterwards Captain Baldy embarrasses us all by whining about some depth player on the opposing team rather than own up to his own ineffectiveness.