Ducks Gameday -- Europeanness. (No, you are!)

Share All sharing options for: Ducks Gameday -- Europeanness. (No, you are!)

(Note: this post really has nothing to do with Europeanness; I'm just bitter with yesterday's result and had to get that post title in before the Ducks flew back to North America.  Sorry, racists!)

For the fifth year in a row, it has taken the Ducks less than 60 minutes to shatter my hopes for a solid start to a season -- yet again, they weren't even close to competing with their opponent.  So how did those previous four seasons trend?  Upwards, I guess. 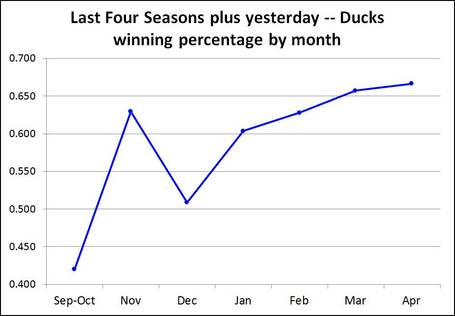 But man -- that .420 October record over the past four seasons really sets the bar pretty low.  Whatever Carlyle does to the Ducks in training camp, it's not preparation for the first month of the season.  Here's some old complaints after other piss-poor openers -- figured I needn't keep writing them after this many.

Me three years ago:

I've put a table together that lists the last seven times an opponent has broken a tie against the Ducks.  All seven times the Ducks also allowed the next goal for a 2-goal deficit, and in six of seven times the lead was extended to 3 goals, on average less than 20 minutes later....

Two games in, and the Ducks have scored three goals... if anyone who was actually projected to score goals could put the puck in the net, that might help things considerably.

Me two years ago:

So come on, Snail-Ducks.  Enough with the awful starts -- like the post title says, First Periods Matter.

The Ducks were outscored 2-0 in the first period and were outshot 9-6.

Now the Ducks are notoriously bad starters -- they've won 4 of 17 openers and 5 of 17 second games, and in more than half their seasons they've been winless through two. Still, this year's team now has the worst goal differential in franchise history through two games....

It's completely bizarre -- I totally remember attending a day of this year's Ducks training camp, yet there's no evidence I can see that it ever happened.

Yup -- and yet despite that, here we go again.  Is it November yet?

But positivity!  Nobody broke their thumb in a lame effort to single-handedly make the game respectable again!

Anyways, as promised, here's my re-designed logo for Blueshirt Banter, SBN's Rangers blog.  This one was really tough -- not much to draw from in the blog title, and there's not too much to draw iconically for the New York Rangers, either.  So I just stuck with some basic themes and went with their most recent big-money signing, Brad Richards. 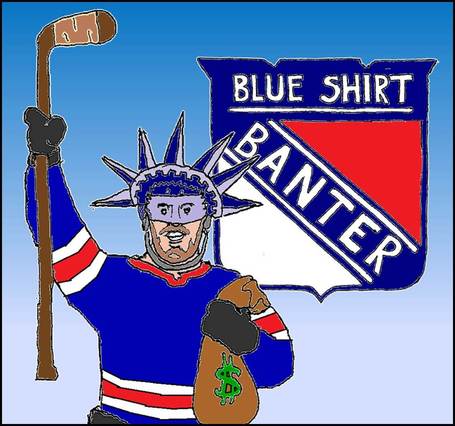 He's pulling off a decent Statue of Liberty pose, complete with his sackful of money.  The blog title works in strongly on the Rangers logo template.  Overall, it's a pretty decent design -- hooray!

I may be a bit flakier in game comments today -- I'll have a buddy over to watch this one.  Let's hope the Ducks play some hockey or something.

Prediction: Ducks get outscored by, I dunno, five goals?  Getzlaf assists on a few.