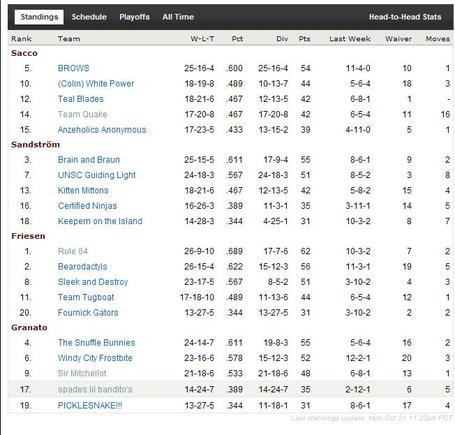 Spade has the conch shell and is writing this week's report and will take full advantage and do what I want. I hate that goalies determine a majority of the winners...so Im gonna go ahead and ignore them. If you knew your goalie had a great week and you want pop a boner about it  do so in the comments. I was busy yesterday and will be today...so this is half ass-ed..which should fit right in to the normal fantasy recap

MVP: Former duck Chris Kunitz had a good week..gawd would be nice to have him back on our top line.

LVP: Jakub Voracek, whoever you are you sucked ass…Iginla laid an egg too.

Tu madre seems to not be trying this year or drinking too much brass monkey...one or the other..Im not sure what makes the determination on what is a "Premier Match-up" so I went with this one..

LVP: a lot to choose from here also how bout Zetterberg a -5?

Tim Connolly is off the IR so all my problems are solved! Scottyknows is my co-manager so i blame this undressing all on you bud...when is the last time scottyknew anything?

the mighty sleek falls from the top perch!

who the fuck owns these 2 teams? I don’t know you so you don’t get a cool comment

Niese and Grace you were Brow beaten!!...ohhh look at me!. is that a pun?

MVP: the team with metal poop for a logo had contributions from most everyone..Logan Couture contributed in the most catagories

LVP: Dustin Penner you were fatter and sucker than usual...want to come back to the ducks?

in the battle of the worst trash talking "We will feast on your souls and drink your nutritious blood! " space poop wins…oh and Nut has Kyle Clifford in his lineup…dear god

Teal Blades vs. Brain and Braun

MVP: both these teams had horrible stats…Dan boyle did the most to help his team with +4 and 9 SOG.

LVP: Kris Versteeg would fit nicely in the Ducks lineup as he didn’t show up either..or didn’t play enough..too lazy to look up….

2 sharks fans go fin to fin and stink it up

LVP: pleases me to say Simon Gagne took a shit.

I rhymed right there! some better smack talk in this matchup per Meg "One time I founded a boy band. It was between my couch cushions."

LVP: the uglier of the twins Daniel Sedin played like a fire crotch..that makes sense right?.

all the goalies in this matchup have first names that start with "J"...

Team Tugboat vs. The Snuffle Bunnies

MVP: Danny Briere was a beast in most categories…wayne simmonds 10 PIM..you bad boy!

LVP: breaking my rule here..because A)PNK pisses me off and B) always fun to laugh at the #1 pick in a fantasy draft doing bad C)cuz its Roberto Luongo and D)cuz I can

seriously PNK you lost to Rudy…CHOKE YOURSELF NUMBNUTS!

This was a bad week for me to do this..as Im super busy at work and at home..I still did what I could...I wanted to add Rum diary quotes as I watched the movie on friday..but didnt have time..Ill give this a better shot another time. Fuck goalies!