Sharks Gameday: Beauty and the Beast

Share All sharing options for: Sharks Gameday: Beauty and the Beast

A flashy offensive defenseman like Brent Burns can be a huge asset or a big liability. A d-man who takes risks and goes out of position can help create big plays for his team, but he can just as easily be the guy who allows the big play from the opposition. To reach his true potential, an offensive defenseman needs to find the right partner. He needs to find a player that compliments his style in every way. A perfect match. A soul mate.

It's a tale as old as time.

For years now, Marc-Edouard Vlasic has been one of the Sharks' most reliable defensemen. Since the 06-07 season, when Vlasic was only 19, he has been playing over twenty minutes a night. He has contributed offensively along the way (30 assists in 08-09) but his primary role has always been more of a stay-at-home defenseman who rarely makes mistakes and does all the little things correctly.

Burns and Vlasic (PICKLESNAKE!!) have been playing together this year as San Jose's second d-pair. The thinking was that pairing Burns with Vlasic would help to reduce the occasional backlash the Sharks would suffer from Burns' risky plays (Remember folks: when Brent Burns does something risky and it leads to a goal against the Sharks, we say "The Sharks just got Brent'd!"). The Sharks could benefit from Burns's offensive skills while still playing solid defense.

That was how it was supposed to work in theory, anyway. Is that what is actually happening?

After the jump: stats ahoy!

Neither of these stat-lines is phenomenal, but both are respectable. Currently neither Vlasic or Burns is on pace for any career highs, but of course the season is still very young. Burns has a bunch of shots and a couple of power play goals, both good signs for the team. Dan Boyle is still the team's leading scorer on defense, but both Burns and Vlasic are scoring every couple of games as well.

There's a lot more involved in properly judging how a d-pair is working than simply looking at scoring and plus-minus, however. If you're into Corsi numbers and that sort of stuff (which you really should be) then taking a look at the Sharks defense on Behind the Net can be illuminating. I don't understand these types of statistics nearly enough to begin analyzing them in depth, though. Sorry. If I've let you down then I recommend you go look at the picture at the top of this post one more time and then ask yourself why you thought the text that followed would be professional in any way.

Rudy did his best to explain the advanced statistics stuff to me, but honestly I don't think he really understands it that well either. Our tentative conclusions were:

1. Burns and Vlasic play the second-toughest competition as a pair, and are doing quite well.

2. Burns in particular is awesome in terms of Corsi.

3. Burns and Vlasic make a great pair. PICKLESNAKE FOR LIFE!!!

Of course, this could all be wrong, since our analysis is like playing a game of telephone with a couple of ESL students. Oh well.

For many reasons, only about 60 percent of which are related to his robotic sex-pants, I'm thrilled to have Brent Burns on the team.

Prediction: It's an exciting, hard-fought game, but in the end the Sharks emerge victorious. It will be just like this, pretty much, with the Wild playing the part of the wolves and the Sharks represented by the Beast. 3-2 in OT, with Burns scoring the game winner.

Finally, here is a picture I drew of Douglas Murray as Gaston: 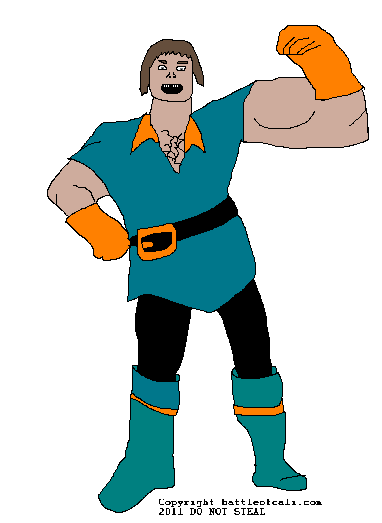 Oh, and Beauty and the Beast is my 69th-favorite movie of all time.

There is one Disney animated film higher than it on my list.