Share All sharing options for: Kings Gameday: Vancouver is Overrated

Friends, I'm here to dispel a notion that has been accepted without thought for far too long.There's this idea out there that Vancouver is really good at what they do and I'm not going to lie, it's complete bull. They're not that good! Yeah yeah, they accomplished a lot this year but that success is way overblown. And yet, all we hear from pundits is, "Vancouver is destroying!" "Vancouver is tearing it up!" "Vancouver is on fire!" On fire? Please. They're barely average.

I know what you're thinking: "If they're not good then who is?" Los Angeles, I say. Don't laugh, I'm serious. We're better than Vancouver. What's more, I can prove it. I've assembled some video comparing the two below the fold that will indisputably make my point. Let's take a look:

Are you kidding me? You call that a riot? I've seen people more out of control at an SEC tailgate. Now, I don't want to brag but I've been to my fair share of riots and I've never seen someone taking a photo op at a real one. Where are the stones? Where are the Molotov cocktails? Where is the violence? At one point, the police are slowly walking backwards and someone throws an empty milk carton at them. A milk carton. I guess I should be happy it wasn't a milk bag at least, but still.

(Check out the idiot at 1:15 who decides he's going to break through a glass door with a plank of wood, carefully times his throw with his buddy taking the picture, and then he doesn't even smash the door. Disgusting.)

Compare that pathetic display to a far superior riot, the 1992 LA Riots. This is what a real riot looks like:

Did you see that? They used a van to break into a store and they didn't wait until their buddy was taking a picture to do it. Now that's a riot!  Did you see all the street view camera shots? Hell no! Because no cameraman is safe to take video! No photo ops, no staged protests, just people mad as hell and not taking it anymore.

While we're on that subject, let's examine the motives behind these riots. The Los Angeles area has had 3 major riots since the start of World War II: The Zoot Suit Riots, the Watts Riots, and the 1992 LA Riots. Let's compare why those riots happened to the riot in Vancouver:

Zoot Suit Riots: Anti-Mexican sentiment and the increased presence of the U.S. military created racial friction that erupted in the brutal beatings of many Mexican Americans after 11 American servicemen claimed they were jumped on June 19th, 1943.

1992 LA Riots: After the acquittal of 3 white and 1 hispanic LAPD officers captured on video tape beating Rodney King, LA erupted in violence for over 6 days.

Obviously, there's one key factor in any good, honest riot: the racial element! There was no racial element in the Vancouver Riots, unless you think Zdeno Chara brutalizing the Sedins is racism for some reason. Racism turns a riot from, "Weee this is fun!" to "I'm going to steal shit and it's OK because it doesn't belong to the people I identify with!" That Us vs. Them mentality is needed to revert people to their primal stages and thus make them far more dangerous. Vancouver missed this element and thus, their riot sucked.

(You might be thinking, "Wait, it wasn't hockey, it was the anarchists!' First of all, anarchists are pussies and wilt like flowers because they're not fighting for anything. They're lazy clove-smoking douche bags who never moved past the stage we all went through when we were 15. Letting anarchists cause a riot in your town just means that you're even bigger pussies than they are. Second of all... c'mon, anarchists? At least let it be Nazis. I mean, say what you want about the tenets of national socialism but at least that's an ethos.)

Finally, let's take a look at 2 pictures to determine who really puts on the better riot: 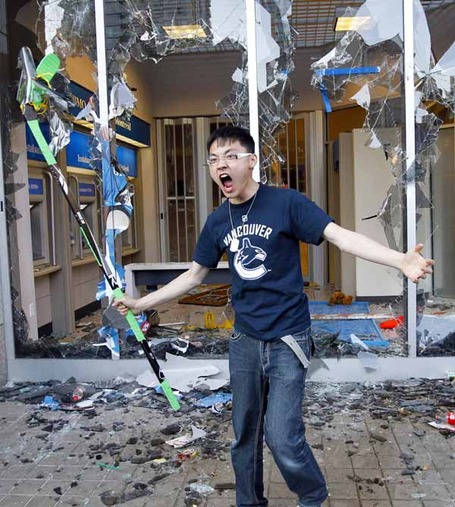 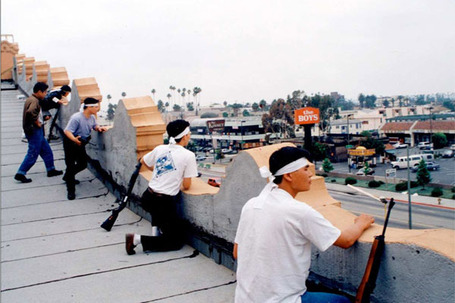 In conclusion, can you call Vancouverites douche bags? Sure. But rioters? Pfft, come back to me when someone is actually murdered.