Ducks Gameday -- Sorry, Hiller. It's the only way.

Share All sharing options for: Ducks Gameday -- Sorry, Hiller. It's the only way.

The Ducks are playing like a bunch of idiots, kind of like they did for a lot of last year, but fret not, Ducks fans!  I've devised a strategy out of this mess, I think, but it's not going to be pretty.

The proposed solution (since the obvious options aren't happening; Carlyle is still coach, Getzlaf is still captain): Jonas Hiller is going to have to fake a recurrence of his vertigo symptoms and allow a lesser goaltender to become the #1 netminder.  That really seems the only way that Anaheim skaters will wake up and start playing something that resembles competent hockey.

Yeah, it sucks -- Hiller has worked his ass off this summer to get back to playability, but the sad reality is whenever these Ducks feel they have a capable netminder, they stop playing and force that goalie to win the game on his own.  No offense to speak of, countless giveaways, tons of odd-man-rushes against, basically the hockey equivalent of constantly saying "Fuck you, Hiller."  It's not the kind of shit they'd pull on a Ray Emery or a Dan Ellis, though -- we saw that last year.  In front of lesser goaltenders, the Ducks look kind of like an NHL team.  One might wish that they could somehow do this FOR Hiller, but fuck that guy, I guess.

So Jonas, go spin some circles around a baseball bat a couple dozen times then go see that team doctor.  Then take a long break until the Ducks remember that they need you later in the season. 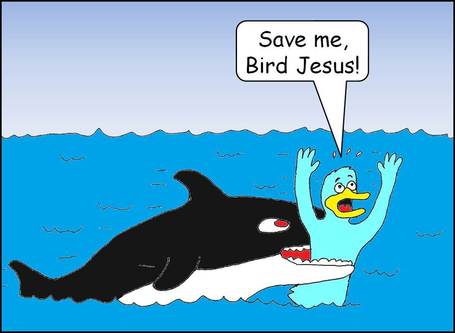 Hopefully Bird Jesus is as generous as Bear Jesus was.  :)

I'm watching tonight's game DVR-delayed to give Bird Jesus an extra hour or two to work his magic, so I won't be around for game comments.  Have fun without me!

Prediction: Today's 11-11-11?  I guess that means that Saku Koivu scores a hat trick.  Or gets a triple-minor.  Tune in tonight and find out!