BoC Gameday: The Best Players To Play For The Kings & Ducks, 10-6

Share All sharing options for: BoC Gameday: The Best Players To Play For The Kings & Ducks, 10-6

Earl and I combined our forces for the next 2 days to bring you the best players to ever don both a Kings and Ducks jersey in the NHL. It was an exhaustive process that I'll share with you now:

Earl: Sure. What is it about?

Me: Guys who played for the Ducks & Kings.

Earl: OK, let's both make a list and compare in a bit.

WIthout further ado, I give you the 10 best players to don both a Kings and Ducks jersey! 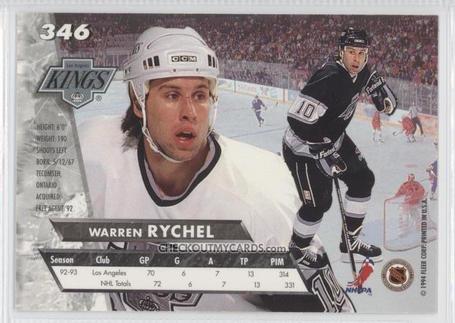 Rudy: It's weird how much I loved Warren Rychel when I was a kid but if he played for the Kings now I'd fucking hate him. Ah who am I kidding, I can't hate a 6'0" guy who fought Stu Grimson, Marty McSorley, Rob Ray, Nick Kypreos, Bryan Marchment, Doug Houda and Jay Wells in his career! I can't remember but I'm assuming he lost all those fights.

Also, you might be interested to know that Warren Rychel is currently the co-owner and general manager of the Windsor Spitfires. He also looks like the love child of Peter Forsberg and fat Val Kilmer.

Earl:  To tell the truth, Rychel wasn't on my first draft of the 10 best King-Ducks, for mainly two reasons.  One, I barely remember him as a King, and two, I barely remember him as a Mighty Duck, also.  But hey -- Hockey Reference says he's a good fit.  He was on the first-ever Anaheim team to qualify for the playoffs, he played on the Kings' Stanley Cup Finals team, and his four highest-scoring seasons of his career came in Southern California (don't get too amazed; his best season was 19 points).    But points weren't really Rychel's measuring stick -- he also compiled over 1,000 PIMs for the Kings and the Ducks, and that's some solid snarl. 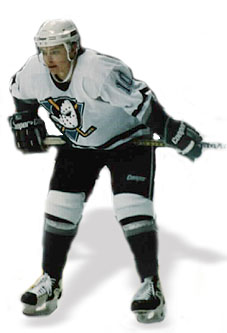 Earl: Oleg Tverdovsky had two pretty solid stints playing in Anaheim and one fairly lousy year in Los Angeles -- the main reason he's not ranked higher is because he never succeeded as a King (see also: Dustin Penner).  But he was an excellent talent, and in the height of his career he was a show-stopper, somebody you could mention in the same breath with Kariya and Selanne.

Of course, Tverdovsky's biggest contributions to the Ducks came in his trade returns -- the first time he was traded away, the Mighty Ducks landed a Finnish winger named Teemu Selanne, and that's worked out pretty well.  The second time he brought the Ducks Petr Sykora and the pieces that would later land Rob Niedermayer, which of course had its own excellent payoff.  Oleg did end up winning a Cup against Anaheim, but it's tough to stay too mad at the guy who did fetch us our Finnish Flash.

Rudy: He was on the Kings? Huh. The more you know.

Rudy: 2 gentleman pugilists and probably the 2 most beloved hockey players in Southern California. Parros is awesome because he is goofy and can only throw 2 punches before falling down while Grimson is awesome because he's an evangelical Christian lawyer who in a past life used to beat the fuck out of people. Read that again. Here's my favorite Grimson fight in a Kings jersey and I imagine you already know which one it is:

Also, here's Grimson fighting Marty McSorley back when Stu was a Hawk and Marty was a King

As an aside, I want to hang out with guys named Stu & George. We'd drive T-birds and break into the girls' locker room, it'd be awesome.

Earl: Two punch-throwers get to share a spot, and I think it's fitting -- I really can't solidly decide who really belongs higher than the other.  Because they both owned the enforcer spot very well for both the Kings and the Ducks, with dignity and charm, and especially for newer SoCal fans, that sort of gentleman-enforcer icon is important.  Both the Grim Reaper and the Moustache have earned way more SoCal fans than they probably deserve, but they did it the right way -- by being likeable individuals who could throw a mean punch when called upon.

Both the Kings and Ducks have gone through some tough seasons where as a fan, the only highlight you'd get on some nights might be a fight.  Thanks to both Grimson and Parros for those woeful nights when they finally gave us something to cheer for. 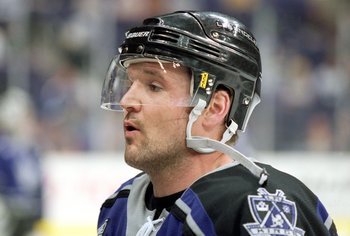 Earl: That's right, before he was a Stanley Cup and Jack Adams winning coach, Dan Bylsma was a King and a Duck (in fact, he never played for any other NHL franchise), and he was a very solid non-scorer.  What always struck me about Bylsma, whether he was on fourth-line even-strength duty or a forward on the penalty kill, was that he consistently made smart and safe plays -- not plays that would make their way into the opponent's net, but he would keep the puck pretty effectively away from his own net.

And that was important, especially in the 2003 playoffs.  After two rounds of upsets (Ducks sweeping the Wings then ousting the Stars), bottom-six winger Patric Kjellberg shocked a lot of hockey fans by arbitrarily deciding his season was finished; he abruptly left the team and went back to Sweden.  After sitting two rounds, Bylsma was thrust into the playing lineup, and while he would only contribute one assist in the final two rounds, he was never a minus player in any of those playoff games, and ended with an impressive +3.  Solid, solid guy.

Rudy: Bylsma is a cautionary tale against hating the marginal role players on your team. He's also the reason I'm going to feel like a real asshole when Brian Willsie leads the Quebec Coyotes to the Stanley Cup over Los Reyes de Los Angeles in 2019.

-He was happy on the Kings but then he

-got traded to the Islanders where he found some success, but then he couldn't reach an agreement with them and

-signed with the Maple Leafs, where he had an OK first season but then he

-got cancer, which he managed to beat but then

-got traded to the Ducks, which is worse than getting cancer somehow but he still managed to be decent until he

-got his forearm sliced open.

He's like a modern day Candide. Just go cultivate your garden, man, it's not worth it.

Earl: It's very easy to underappreciate the Rat -- his cap salary is too high, he can't shoot at the corners of the net, he isn't a stellar passer, and he doesn't hit anybody.  But this season's Ducks have won 2 of 3 games with Blake and have only won 4 of 14 games without him -- he is still a valuable contributor, night-in and night-out Anaheim’s best hustler.

For the Ducks, he has mostly found his niche on Selanne’s opposite wing, and it’s a good fit.  Selanne doesn’t do a ton of "dirty work" around the boards or in the defensive zone, and the Rat is more than willing to fill that gap.  He frees and chips pucks with admirable determination, and his speed away from the puck gives Teemu a little more room to operate offensively.  It will always remain a mystery how Jason Blake ever scored 40 goals on the Island – he’ll never come close to that again – but he is still a useful hustler.  Go Rat!

Prediction: Fans of the two teams fight over who hates their team more.