San Jose's penalty kill is NOT the worst in the league. That honor belongs to Toronto, who have only killed off 73.1% of their penalties so far.

San Jose's penalty kill is the third-worst in the league. They have killed off 75.5% off their penalties.

Looking at the full-season stats for last year, the worst penalty killing team in the league was the Colorado Avalanche. They ended the season at 76.1%, better than the Sharks' current success rate (the Avalanche are currently fourth-worst in the league in this regard, by the way). The Sharks ended last year with the twenty-fourth ranked PK unit in the league, at 79.6%.

I guess what I'm trying to say is that San Jose's penalty kill is kind of bad. It was bad last season and it's looking like it might be bad this season too. In the 09-10 season it was great: 5th best in the NHL. Now it doesn't work at all.

After the jump, we try to find out why.

Why is San Jose's Penalty Kill so bad? Here a few possible explanations:

Hypothesis #1: The Sharks give up too many shots on the penalty kill.

Could the Sharks' PK strategy be allowing too many shots on net? Here is a table of the top three PKs in the NHL, the number of minutes they've spent short-handed (rounded to the nearest minute), the numbers of shots against them during that time, and the rate of shots-against per minute while on the penalty kill.

And here is a table of the bottom three PKs:

As expected the three worst penalty kills DO allow more shots per minute than the best three. So maybe that's the problem? Maybe the Sharks need to focus on blocking more shots, or being more aggressive with their sticks, or just doing whatever the hell the Devils are doing that makes the team on the power play take fewer shots?

So is hypothesis #1 correct? Probably not, for a couple of reasons. First, here are the numbers for the fourth-best PK in the league, which belongs to the Predators:

Another clue that the PK shots against/minute ratio doesn't tell the whole story can be found by looking at the Sharks' PK for last year, which sucked, and for the 09-10 season, which was 85% and fifth-best in the league.

Okay so...crap. So it looks like PK Shots Against/Minute is pretty worthless as an indicator of penalty killing success? So, uh, sorry for wasting everybody's time with all these tables.

Seriously though, it is interesting that the success of a penalty kill doesn't seem to be very strongly tied into how many shots on net it is allowing. How the heck are the Predators kicking butt on the PK, when they're allowing so many shots per minute? 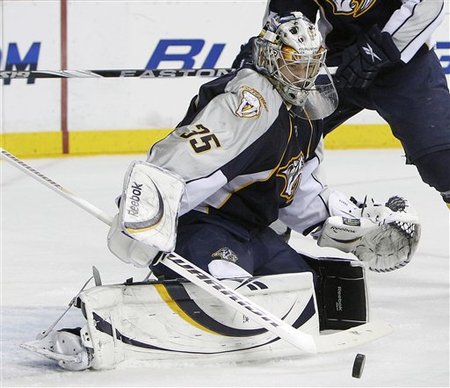 Hypothesis #2: Antti Niemi sucks, and it's all his fault.

Alright, maybe "sucks" is too harsh of a word. But since the number of shots against doesn't explain the Sharks' predictor PK performance, maybe it has something to do with goalies?

Pekka Rinne's .933 save percentage is 9th best in the league for goalies who have played at least six games. His play is a clearly a factor in Nashville's PK success. How's Niemi doing?

Hmmmm. That isn't that great.

Niemi is 30th in the league in save percentage (again, looking at goalies who have played at least six games).So is he to blame? Is hypothesis #2 correct?

It doesn't look like it. At least, it's not the whole story. Let's look at the past two seasons once again:

So last season, when the Sharks' penalty kill was a problem all year, Niemi's save percentage was a solid .920, 13th best in the league.

In 09-10, when the Sharks' penalty kill was the 5th best in the league, Nabokov had a save percentage very slightly higher. Is that tiny difference the explanation for the huge swings in penalty killing success? Possibly - but it sure doesn't seem likely.

Since it looks like we can't attribute the success of a penalty kill very strongly to goalie performance either, we have to look elsewhere. What else was different about the Sharks' penalty kill back in 09-10, when it was so very very good? 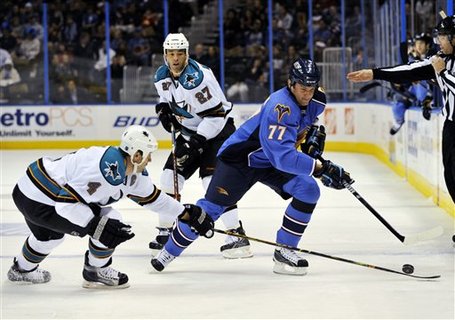 So were these guys the magical difference? They were definitely part of it - but it's difficult to pinpoint exactly what they were doing out there that was so important. We've already shown that there wasn't a big change in the shots against on the penalty kill for the Sharks, so were Rob and Manny forcing the opposing team to take lower-quality shots? Or maybe they were jumping on rebounds and getting them away from the net (although not clearing the puck because that would reduce the PK shots against per minute)?

This is all pretty tough to measure statistically. The best place I can think to look is the Sharks goalies' save percentage while the team is on the PK. That looks like this:

* = among goalies who played at least 20 games

Finally we see a bit stronger of a relationship between a stat and PK ranking! Success!

So what does this mean? Well since we have established that Niemi and Nabokov were pretty similar in terms of save percentage overall during these seasons, possible reasons for this discrepancy on the PK are:

A) The Sharks' PK was basically the same in 09-10 but Evgeni Nabokov is, for some reason, a better PK goalie than Niemi.

B) Something that the Sharks' PK was doing in 09-10, probably involving Blake and Malhotra, helped Nabby post a better save percentage than Niemi has done since then.

B seems like the more likely explanation. And if that's the case, then the solution is simple: you can either trade for Malhotra and lure Blake out of retirement or the coaches and players can try to replicate what those guys were doing in 09-10. The team's signing of Handzus was largely an attempt to address the PK problem - but thus far it doesn't seem to be working.

But of course there is another possible answer to all of this...

Hypothesis #4: It's all just bad luck.

Without question, save percentage and shooting percentage are largely influenced by luck. Therefore, the argument goes, if the Sharks continue to limit shots against while on the penalty kill, they'll be successful in the long run. There's no reason to worry about the PK because it will improve given time, since the team has good players and does well in basically every other aspect of play.

There is some merit to this argument...but I also find it lacking. At what point does "luck" become a trend which is symptomatic of a failing in a system? Is an 82 game season of a crappy PK just an example of "bad luck"? Should the coach and team and fans just not worry about it? And if this season the Sharks have a bad penalty kill all season long, just like last year, and they suffer because of it in the playoffs, just like last year, should they still simply stay the course?

Prediction: Sharks win, 3-1. They get lucky and kill off a couple of penalties.

(This post was brought to you by the movie Frailty, my 67th-favorite film of all time. Go Paxton!)