In a complete side-story irrelevant to hockey, it's Thanksgiving week, and my brother, his wife, and his 4- and 1-year-old children are staying at my place for the week.  I honestly believe it's the first time that somebody younger than 20 has been inside my house -- let's hope nobody not everybody dies!

But no time for much blogging or hockey today -- Sleek's nephew needs lots of attention!  Here's an old cartoon for you.  :) 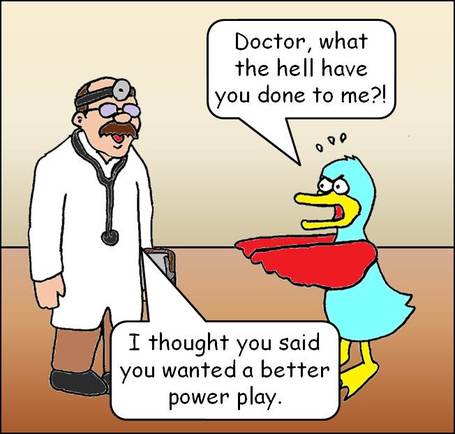 In the meantime, here's some slight encouragement for Ducks fans -- visitors this season who have spent two days playing two games in Southern California have shown a strong pattern of alternation, and with the Kings' loss yesterday, it's theoretically the Ducks' turn to cash in today.

Prediction: Pattern gets broken.  Ducks decide to Carlyle instead of winning.