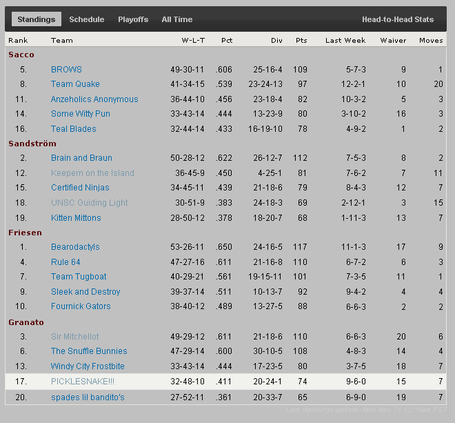 MVP: My first-round pick Pekka Rinne played three times and had a GAA of 1.97. He's so good you guys.

LVP:Tomas Vokoun, like the rest of the Capitals, is surprisingly terrible this year. He had two losses and a 4.19 GAA.

spade, you just got BIT!

Anzeholics Anonymous vs. Some Witty Pun

MVP: Despite his crippling poverty (I once saw him steal a bag of cans from a homeless guy) Mike Smith is having a remarkable year. Three starts, two wins, GAA 1.95. Oh, and Claude Giroux had seven points.

LVP: Matthew Lombardi, Mason Raymond, and Marc Staal are all on the IR. Someone has placed an alphabet-themed curse on Plank's team.

Jimmy Howard and Jaroslav Halak are both Plank's goalies, and both have the same initials. Cool, huh?

LVP: Can this be right? Alex Ovechkin had zero points and was a minus five? That's, uh...shitty.

I heard that Sidney Crosby might play soon. That should help Nut's team out for a week...and then Crosby will get hurt again.

Sleek and Destroy vs. Teal Blades

MVP: Chris Pronger had five assists, giving Sleek the victory in that category.

LVP: Keith Ballard had a bunch of zeros, then he hurt his back.

For the Teal Blades, Ryan Suter was a plus seven. The Blades beat Sleek 19 to -6 in that category.

LVP: Even Dan Ellis can't buy a win on the Ducks.

Quake vs. Halo ends in a brutal KILLTACULAR! for Team Quake.

Brain and Braun vs. BROWS

MVP: Cal Clutterbuck, he of the funny name, had one goal (a game-winner), one assist, 12 PIMS, and 12 faceoffs won.

LVP: Jamie McBain has a lot of awesomeness in his name, and zero awesomeness anywhere else in his life.

The winning team in this match-up had 6 goals, while the loser had 3. How electrifying!

LVP: Everyone else on both of these teams this week.

The Snuffle Bunnies vs. Certified Ninjas

MVP: Matt Read and Brian Gionta both had three goals this week.

LVP: Tomas Kaberle had no points and was a minus two, but honestly this whole team was pretty mediocre this week so pick whoever you want.

If you're going to hire a ninja to perform an assassination, make sure you hire a certified ninja.

Keepem on the Island vs. Rule 64

Aside from the boring stupid tie I previously discussed, this was the closest match-up of the week.

MVP: James Neal had three points and twelve shots on goal, helping Rudy reach an even 100 shots this week.

LVP: Bobby Ryan didn't score this week, but at least he was a minus four.

In other news, former Ducks superstar Ray Emery posted an 8.84 GAA for the Frostbite this week.

That's all. Volunteer for fantasy recap duty in the comments.