I've already mentioned this in last game's comments, but I wanted to properly document an impressive trend for Anaheim's "Emperor of Awesome" Teemu Selanne.  Here's the official scoring on all ten goals the Ducks have scored on this road trip so far, with the one commonality highlighted in bold:

Go old man -- while the storyline has been about Anaheim trying to fill its Jason Blake void, really that hasn't slowed down Teemu very much; every single even-strength goal on the road trip thus far has come from the second line.  Rather, the struggle has getting anything useful from the rest of the adjusted lineup, particularly the top line.  Selanne is a +4 on this trip; Getzlaf and Perry are both -4.  And after three straight embarrassing losses, I'm not even sure if I'm pulling so much for victories these next two games as I'm pulling for Teemu to propel himself into the NHL record books once again.

After all, if this keeps up, Teemu would have to set an all-time NHL record for "oldest player to score a point on all his team's goals over a 7-game-or-longer road trip".  And quite possibly he'd be the youngest as well.

I know what you're thinking: "Sleek, this is cool and all, but where's my damn cartoon?!  I demand a refund!"

Cool it, man, it's coming.  Except this time it's not about hockey at all -- not only have the Ducks failed to inspire the ol' drawing pen, but I've been sketching up a side-project cartoon anyways.  Tonight's game falls on Thursday, which means I can only stick around a period and a half or so before heading off to my weekly choir practice.  And tonight after rehearsal we're celebrating our accompanist's twentieth year on the piano bench (don't tell her -- it's a surprise!).  We are each supposed to bring a personalized thank you card tonight, and I figured I'd use my shoddy internet talents to draw her up a music-themed cartoon for mine. 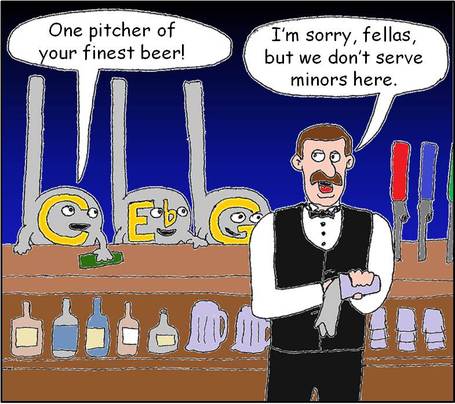 Of course, with the cartoony music notes, it'd probably work better for a St. Louis Blues gameday, but in the classic spirit of BoC, Whatever!  :)