(Today's gameday is a collaborative effort from Rudy and Meg).

The Kings changed things up a little bit in the game against Pittsburgh, giving Anze Kopitar an easy match-up against Pittsburgh's 3rd line while Mike Richards handled Evgeni Malkin and Jarret Stoll took on Jordan Staal (presumably in an attempt to kill poor Bob Miller). It worked in that Kopitar's line produced 2 goals and looked dominant... but Staal's line got a goal and Stoll's line ended up taking 2 penalties while defending. So it was good and bad.

Tonight, I expect the Sharks to look for a Thornton-Kopitar match-up while the Kings will hope to get Richards out against Logan Couture. Neither coach is all that interested in matching lines so I expect we'll see a consistent look all night. Should be a fun game! These two teams are awfully similar so it should be interesting to watch.

Against the Penguins the Sharks had a really bad start but then came back to win the game with a strong finish. Against Nashville it was pretty much the opposite. The Sharks need to start putting together some complete games.

The team has tried out some line shuffling recently, and that may continue after the way the game against Nashville ended. Mixing things up might not be the best idea though, because a lot of the mistakes and miscues that have caused problems for the Sharks in the last few games are exactly the types of errors that can be reduced when guys on a line or a defense pairing get to know each other better and develop some chemistry.

Ray Ratto was on the Sharks radio broadcast between the second and third periods last game, talking to Jamie Baker. Both of them came across like fools, and it was awful radio. I will give Ratto credit for one thing he said though: when Baker asked him if he thought the Sharks looked like Stanley Cup contenders he said "Not yet." He explained that they still look a bit disorganized and unsure at times, and I think that's fair. The regular season is long, and the Sharks will have plenty of time to find their rhythm.

The rest of today's gameday is all about the movie Dark City.

Dark City is my 70th-favorite movie of all time. Rudy likes it too.

If you didn't see the movie or don't remember it at all, don't worry! Here is a brief summary, with some very slight modifications so it's about Teemu Selanne: 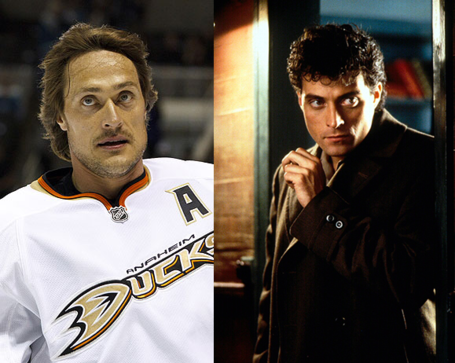 Teemu Selanne's life has become a nightmare. He awakes on a strange team but can't remember how he got there. He soon finds that he has the incredible ability to score goals, an ability none of his teammates share.

Teemu travels around the city trying to solve the mystery of his past. His memories are jumbled and contradictory. He thinks he remembers retiring. He remembers playing for a team called the Jets a long time ago - but not the Jets that exist today. Nothing makes any sense.

He tries to get his teammates to wake up to the horror of their reality. He slaps Corey Perry over and over, he throws water in Getzlaf's face. Selanne screams at them to "Remember to play defense! Remember to score goals! And only pass to people on your own team!"

But it's all hopeless. There is a sinister force behind the scenes, working against Teemu: 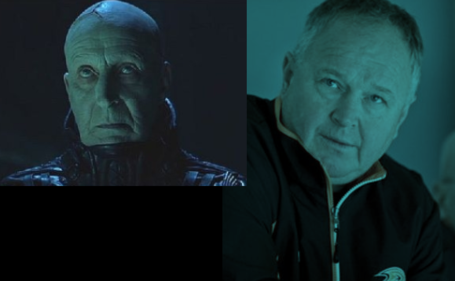 To find out the exciting conclusion, go rent the movie!

A lot of people forget about Dark City because The Matrix has a very similar plot and came out about a year later. On that note, here is a list of popular things and other similar things that are pretty much as good that they overshadow:

That's all for now.

Prediction: Sharks win 4-3 in OT, with the winning goal from Joe Thornton.