Ducks Gameday -- Back of the Pack

Share All sharing options for: Ducks Gameday -- Back of the Pack

Oof -- five games into Coach Kirby's Ducks career and the Ducks have the fewest standings points in the league. The Dirty Ducks are now the Thirty Ducks. 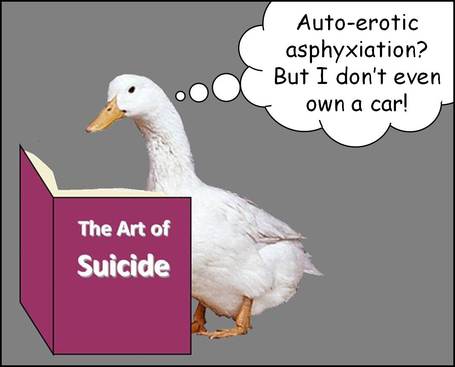 Adapted from a classic. :)

Of course, Boudreau is still safely in his two-week grace period, so none of the blame or credit falls on his shoulders yet. And injuries, illnesses, and World Jr. tournaments are making for a pretty messy lineup, too:

Here were the line combinations from Tuesday’s workout:

Yikes. But hooray -- Lubo may be back!

I rarely look ahead on the Ducks' schedule these days, but I did take a glance today, and I won't be around for game comments for any Ducks games until after Christmas -- my schedule and Anaheim's schedule conflict a bunch this holiday season. Perhaps that's my Christmas gift from the NHL schedule-makers; we shall see.

But tonight, the conflict is potentially a good one -- I'll be at the game with my dad and his buddies in Row B. Because of parental pressures, I'll probably be properly sober, but if you see a guy in a green shirt who looks like he got a haircut yesterday, stop by and say "Hi!". Or "Condolences...". Or whatever. :)