Sharks Gameday: What is Luck? Part 1

Share All sharing options for: Sharks Gameday: What is Luck? Part 1

Without question, luck plays a big role in hockey. From shooting percentages to goalie hot streaks, from Clear Victory standings to bad bounces, luck casts a shadow throughout every aspect of the game.

People have different ideas about what exactly "luck" is, where it comes from, and how we should feel about it. In my new series of posts, that I'll continue whenever I feel like it for as long as I feel like it, I'm going to examine how different individuals, organizations, cultures, and belief systems have viewed "luck" throughout history and around the world - and then I'll take their thoughts on the subject and apply them to hockey.

If that sounds like fun to you, then it must be your lucky day.

What did Ancient Greeks believe?

Copied from the infallible source of all knowledge, Wikipedia:

Ancient Greek theology was based on polytheism; that is, the assumption that there were many gods and goddesses. There was a hierarchy of deities, with Zeus, the king of the gods, having a level of control over all the others, although he was not omnipotent. Some deities had dominion over certain aspects of nature. [...] Other deities ruled over an abstract concept; for instance Aphrodite controlled love.

True fact: Boreas, the North Wind, was the Greek god of winter. He is the closest we have to a god of hockey.

While being immortal, the gods were not all powerful. They had to obey fate, which overrode all.

And even the gods themselves were powerless against a Shanahan suspension.

They would interact with humans, sometimes even spawning children with them.

Ah, that explains Brent Burns. He's the human son of Pythonias, the Greek god of snakes and mustaches.

What did Ancient Greeks believe about luck?

Luck was seen by the Ancient Greeks as an aspect of Fate. Luck was represented by the gods Tyche and Nemesis. Tyche (also known as Eutykhia) was the Goddess of good fortune, while Nemesis was the goddess of "fair distribution," and provided a balance against the riches good luck could bestow.

Attention NHL Advanced Stat nerds: Nemesis is the Goddess of regressing to the mean!

How can we apply these beliefs to hockey?

A team's success in the long term is determined by fate, which cannot be altered even by the Gods. In the short term, however, teams can get boosts by appealing for help to the appropriate Gods.

For the Sharks, the appropriate patron god would be Poseidon, the Earth-Shaker, god of the sea, earthquakes, and horses. 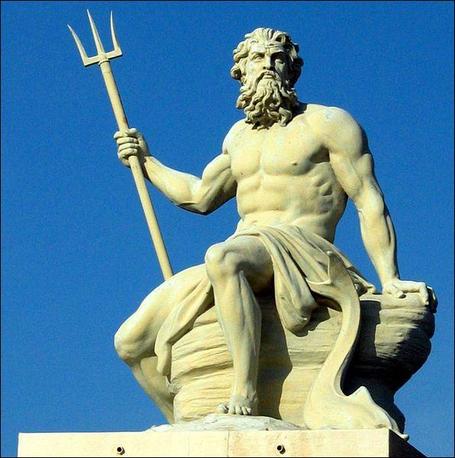 That's a hell of a playoff beard.

The Kings' god would probably be Zeus, King of the Gods and god of the Sky, Law, Order, Justice, Thunder, and Lightning (if Tampa Bay ever complains you guys are going to have to fight for Zeus' honor). 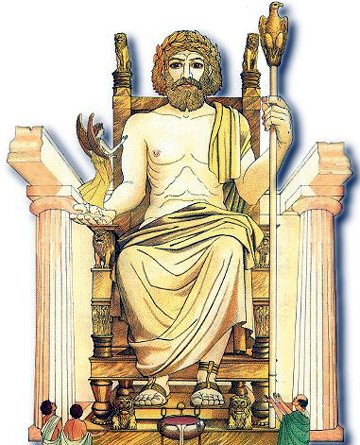 It's a pretty good chair. I guess.

Britomartis is the goddess of mountains and hunting and, more specifically, the nets you use to catch fowl. That's stupid, so she's a perfect fit for the Ducks. 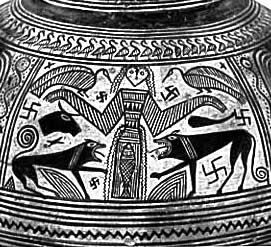 This image has an extra joke about the Ducks hidden in it.

The Sharks need to get Poseidon's attention, so he'll step in and help get them out of their temporary funk. Here is a slightly modified version of the Ancient Greek Homeric Hymn to Poseidon:

I begin to sing about Poseidon, the great god, mover of the earth and fruitless sea, god of the deep who is also lord of Helicon and wide Aegae. A two-fold office the gods allotted you, O Shaker of the Earth, to be a tamer of horses and a saviour of ships!

Hail, Poseidon, Holder of the Earth, dark-haired lord! O blessed one, be kindly in heart and help the San Jose Sharks!

I have now said this hymn out loud while trying very very hard to believe in Poseidon. We'll see what the results are tonight!

I just realized that the last time I tried out superstitious stuff like this was for a different game against the Avalanche. I'm going to take that as a good omen.

The Sharks lost against Colorado on Tuesday, but they fought hard and at least got a point out of it. Any game that goes to a shootout is basically a tie anyway. The Sharks have been slumping hard lately, but I'm having a difficult time freaking out about it. I KNOW they are a good team. They're going to start winning again very soon.

How about a big win tonight, Poseidon?

Prediction: It's all up to Tyche and Nemesis in the end, but Poseidon helps get the Sharks back on the right track. San Jose wins 5-2, with goals from Leonidas, Achilles, Odysseus, Alexander the Great, and Diogenes.

P.S. My 54th-favorite movie is 300. If you want a more-realistic, even-more-badass story of the Battle of Thermopylae, read Gates of Fire.

P.P.S. Thanks to Rudy for help with this post. He's an expert on certain aspects of Ancient Greek culture.