Sharks Gameday: What is Luck? Part 2

Share All sharing options for: Sharks Gameday: What is Luck? Part 2

While you read this, please enjoy the "What is Luck?" theme song

Previously I presented an overview of luck as seen by ancient Greek mythology. Today I'm going to look at what Buddhism says about luck.

According to The Buddhist Centre:

Buddhism is a path of practice and spiritual development leading to Insight into the true nature of reality. Buddhist practices like meditation are means of changing yourself in order to develop the qualities of awareness, kindness, and wisdom. [...] Because Buddhism does not include the idea of worshiping a creator god, some people do not see it as a religion in the normal, Western sense.

What do Buddhists believe about luck?

The Buddha taught that there is no such thing as "luck," as explained by Buddha Net:

The dictionary defines luck as 'believing that whatever happens, either good or bad, to a person in the course of events is due to chance, fate or fortune.' The Buddha denied this belief completely. Everything that happens has a specific cause or causes and there must be some relationships between the cause and the effect.

That's pretty straight-forward. 2500 years ago the Buddha expressed a view that actually meshes well with what most modern, educated people would say about luck: "luck" is just a word people use when they don't understand (or don't want to accept) the causes that led to a certain result.

From the Buddhist perspective, believing in luck, fortune telling, magic charms, and similar superstitions are all pitfalls along the path to true happiness.

In the teachings of the Buddha, it is honesty, kindness, understanding, patience, forgiveness, generosity, loyalty and other good qualities that truly protect you and give you true prosperity.

How can we apply these thoughts to hockey?

Because one of the foundations of Buddhism is the belief that desire is at the root of suffering, the religion is antithetical to competitive sports (although some yoga competitions can get pretty intense). Depending on the perspective of the individual believer the Buddhist view of life can be compatible with individual athletic activities such as marathon running, but any activity which centers on points, victory, or competition is in direct opposition to Buddhism from the very start.

The Buddha would say that it is a serious mistake to become obsessed with sports. Fans like us that spend so much time worrying about how our sports teams are performing are wasting our lives trapped in "samsara," the cycle of suffering. If we ever hope to achieve true enlightenment we should try to stop caring about unimportant things like hockey and start working on our own personal development.

But what did the Buddha know anyways, huh? 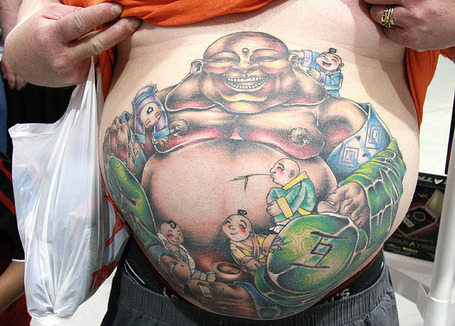 If the Buddha was so smart then explain why this exists.

So we're just going to ignore everything the Buddha ever said about how we should live our lives because hockey is cooler than the Buddha. Suck on that, Gautama!

Buddhism teaches that everything that happens to us in life, good or bad, is the result of a cause. In hockey terms, that means that events which we attribute to "luck" are actually brought about by specific causes. If a team is losing a lot of games, for example, we should be looking at all the possible causes behind those losses. Rather than saying a team is "unlucky" we should strive to understand the underlying causes - so that we can attempt to alter the results.

The most glaring problem for the Sharks right now is the penalty kill. Attributing their 29th-ranked PK to "bad luck" does nothing to actually fix the problem - a problem that persisted all last season and has continued for the first third of this season. I've already spent time trying to identify the causes for the PK's suckyness, so I won't rehash that here. According to Buddhist thought, if the Sharks hope to address the penalty killing issue, they should spend time examining the causes behind the issue and attempting to fix those things which are in their power to fix.

If the penalty kill still sucks after that, well...I don't know. Go meditate or something, I guess.

Another important principle of Buddhism is the idea of "Mettā," or "loving-kindness." It is a form of meditation and involves thinking loving thoughts about (in order) yourself, a good friend, a "neutral" person, and a "difficult" person. Sounds good!

1. Myself: It would make me feel happy if the Sharks won tonight. I'm a nice guy and I work hard to write interesting and entertaining blog posts for people, and I deserve to feel happy.

2. Good Friend: I hope my good friend Martin Havlat is able to heal quickly from his fluke leg injury. He's a valuable member of the Sharks and the team needs him to be healthy. I also hope Brent Burns will -

3. A "neutral" person: I have nothing against the Lightning or Martin St. Louis at all. I hope St. Louis can come back to the team soon, because he's a very exciting player to watch. I love Guy Boucher and his sinister scar and I hope the Lightning totally dominate the crazy new division they will get stuck in next season.

4. A "difficult" person: I hope Chris Pronger's brain doesn't liquify and ooze out of his ears.

That last one was really hard. I really AM a nice guy.

Prediction: Ultimately, competition is a foolish distraction from the true path to enlightenment. So really it doesn't matter that the Sharks are going to absolutely DEMOLISH the Lightning.

P.S. My 52nd-favorite movie is The Empire Strikes Back. Today's post has nothing to do with that film, so here is a cartoon.

P.P.S Just in case it was the Poseidon hymn in my previous What is Luck? post that helped the Sharks win, I'll include it again here:

I begin to sing about Poseidon, the great god, mover of the earth and fruitless sea, god of the deep who is also lord of Helicon and wide Aegae. A two-fold office the gods allotted you, O Shaker of the Earth, to be a tamer of horses and a saviour of ships!

Hail, Poseidon, Holder of the Earth, dark-haired lord! O blessed one, be kindly in heart and help the San Jose Sharks!