Tweets from the road trip:

February 3rd: Bedtime in Boston. If you haven't seen The Cove (documentary) put it on your list of movies to watch.

Anything you say, Logan. It's on my Netflix queue.

Aw that's sad. I hope you weren't too disappointed.

February 7th: Finally got myself an Ipad, pretty pumped.

It's actually written "iPad," but that's okay. Glad you're enjoying it.

Why do people still live in places like Ohio? Haven't they heard of California? It's not a legend, it's real!

February 9th: New Jersey..watched the new Californication episode! Hank Moody is in a little bit of trouble, not good.

I honestly get a kick out of how genuine Couture seems on Twitter. He's really invested in the misadventures of Hank Moody! 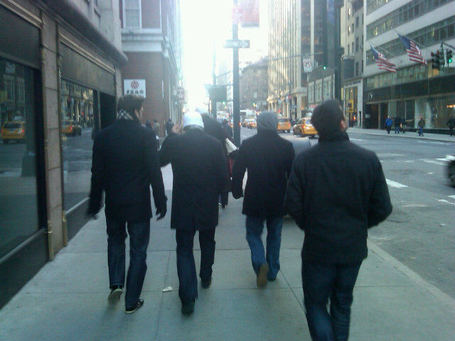 If we assume Couture is taking the picture, and the dude on the right is Devin Setoguchi, anyone want to take a stab at identifying the other guys?

Also do the Sharks know they don't have to all dress the same way when they aren't playing hockey?

February 10th: Back at the hotel, time for some games on the ipad then off to bed, great day today..

I hope you've got some good games on that iPad, Logan. There's more to life than just Angry Birds.

1 hour ago: Wake up, quick breakfast then off the to rink, are we back in cali yet? Cause it is colllddd here!

Come back soon! We miss you!