LVP: Chris Stewart, no goals, no assists, minus five, plus he's ugly.

Antti Niemi had an amazing week for the Kitten Mittens. Right now he's the best player to have from the Sharks.

MVP: There's this guy on the Islanders named Michael Grabner that I just picked up last week. He had eight goals this week.

LVP: The team manager, asleep at the switch.

Jonathan Quick can see through time.

LVP: The team manager has three guys on IR.

Oh, wait - four guys on the IR: I just noticed that one of his goalies is hurt too.

LVP: Rudy made a bunch of changes to his roster this week, but then he didn't bother to set up his team, so what's the point of that?

This report is taking me a long time to write because I'm watching In The Mouth of Madness at the same time.

LVP: It looks like the team manager didn't set up IAmJoe(Pavelski) this week.

Some really weird stuff is happening in this movie.

MVP: Teemu Selanne, getting it done once again.

Practical special effects are so much creepier than CGI, even when they look fake.

MVP: Niklas Backstrom is proving to be good once again.

This movie graphically portrays the danger of reading books.

LVP: What a crazily terrible season this has been for Alex Ovechkin.

These days, whenever I see a movie starring Sam Neil, I like to think of it as documenting the life of paleontologist Dr. Grant from Jurassic Park, either before or after the events of that film. Looking at it that way, this dude's had a really rough life. 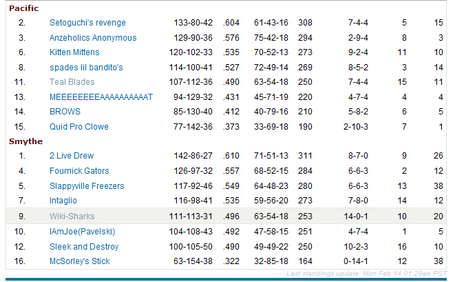 Although now that I think of it Sam Neil did play the Antichrist in one of the Omen movies and an evil vampire businessman in Daybreakers so I guess he deserves all the bad stuff that happens to him.