Well, the All-Star Break is over, and for Anaheim at least it starts with a good ol' BoC battle.  The Sharks, of course, rallied strong against Phoenix yesterday -- tonight is their second game back. 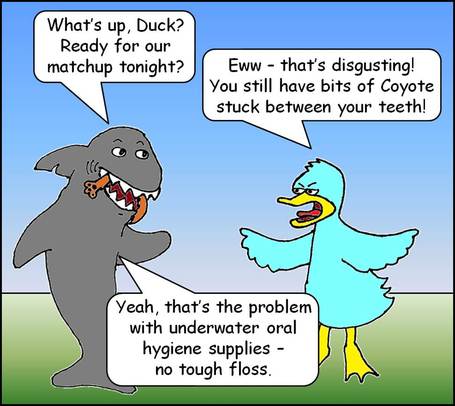 This is a pretty tough test between two streaking teams -- since their losing streak and the invention of Deadwood karma, the Sharks are 5-0-1 in their last six.  The Ducks inexplicably are 10-3-0 since the game that Getzlaf got knocked out of -- fortunately, he's still out two more games, so the Ducks can hopefully continue whatever they're doing without him, and if they do end up needing him, his return isn't far away.

And wouldn't you know it -- tonight your blog buddies are going to be at the game, sitting in the Row B seats -- I'll be wearing the lucky green shirt as usual, and it's going to be Megalodon, Spade-in-Victorhell, and Tu Madre, too -- I have no idea what's going to happen!  It's great!  If you're going to the game and want to stop by and say hi, we'll be at Danny K's around 6:15, and then we'll wander over at about gametime.  Should be a riot (hopefully not literally).

Megalodon sent me his contribution towards this post, too -- it seems he shockingly put in more effort than I did.

Instead of drawing a picture I thought it would be fun to include this picture of a shark-house I made in the PC game Minecraft.  Some people might think it's awesome, or something.  You can just put it at the end of the post along with my prediction:

Megalodon's Prediction: The Sharks win 3-1, with an awesome goal by Pavelski, a sweet goal by Thornton, and a fluke goal by Wellwood. 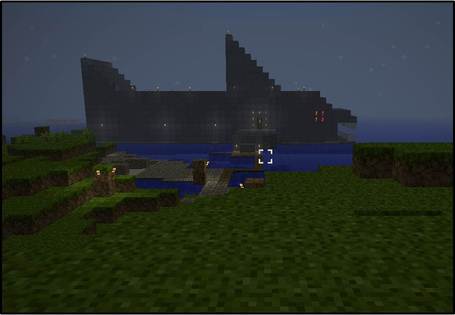