Wiki-Sharks vs. Sleek and Destroy

MVP: Jonathan Quick lived up to his name, and was extremely Jonathan this week.

LVP: Evgeni Malkin leads the league in injuries, but that's about it.

MVP: Antero Niittymaki wins the MVP for getting injured and not playing at all, so that Teal Blades' only goalie game was Brent Johnson's shut-out. Also Pronger had a good week, I guess.

LVP: The best thing Kris Letang has done recently was stumble during the All-Star draft.

LVP: Corey Crawford as one of your goalies? Why?

LVP: One of the goalies for Quid Pro Clowe is playing in the AHL now, and the other one is Jaroslav Halak.

Neither of these guys set up their teams, so let's just move on.

MVP: Boy do I ever hate Corey Perry.

LVP: This one is on the manager.

This was a battle between the worst and best teams in our league, and it ended exactly like you would expect.

MVP: Daniel Sedin had one goal and seven assists. That's not fair at all.

If Andrew Ladd ever has a good week I'm totally going to call him Andrew Radd.

MVP: Pekka Rinne had insane numbers this week for the Freezers.

MVP: Alex Ovechkin I guess? I don't even know any more. 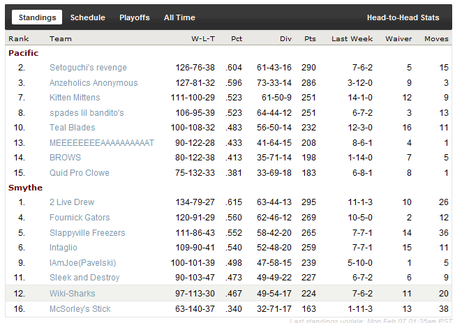