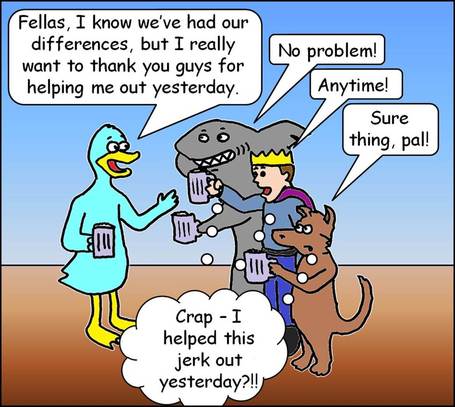 Hooray! I'm not in Vegas!

I don't think there's ever been a day in the history of the universe when all three BoC teams have sat among the western conference's top eight, but I suppose it's possible.  In fact, it could work out that all five Pacific Division teams would sit among the top eight after tonight's game, though that probably can't be sustained with a division-heavy finish to the season schedule.

I should be around for game comments tonight; let's hope the Ducks can make yesterday's out-of-town scoreboard results truly meaningful.

Aside: If any of you are Katamari Damacy fans, or maybe even if you're not, I was forwarded this link last night, and it's adorable.  Basically, copy this text into a web browser while you're on any page, let the hack load, then mouse around and pick up the pieces.