Here's a fun fact for you: in its franchise history, Anaheim has qualified for the playoffs six times, and in every odd-numbered year they've qualified, they have met up with Detroit ('97, '99, '03, '07).  In 2006 and 2008 the Ducks qualified but the matchup was avoided.  For sure 2009 is an odd-numbered year; the only question remains whether Anaheim's going to play past game 82 this time around.

As predicted by numerological destiny, the Ducks and Wings did meet up in the 2nd round of the 2009 playoffs -- the odd-number rule held true.  So here we sit again -- 2011 is an odd-number year; can the Ducks qualify for the postseason and force a re-re-re-re-rematch?

Of course it'd be a daunting matchup for the Ducks -- we haven't taken a standings point from Detroit all season, but that doesn't matter too much.  These days, every opponent scares the crap out of me.  :)

And I suppose we theoretically do have a chance at some standings points tonight.  I should be around for game comments from the ol' hotel room; feel free to stop on by.

Anyways, on to the real subject of this post -- the seriously-plummeting Colorado Avs:

It's a pretty insane fall-off for any NHL team.  46 games into their season, the Avs had a +3 goal differential; 18 games later that now sits at an amazing -37.  They've scored 4+ goals only twice in those 18 games (both their wins coming against the St. Louis Blues), and they've allowed 3+ goals in 17 of those 18 games.  If only Colorado had some sort of team name which captured the sensation of an uncontrollable plummet; wait  a sec -- I guess that's what an Avalanche is.  :)

So in the context of the tanking Avs' season, this set of recent results doesn't really seem too bad by comparison:

Two one-goal losses, plus one by shootout -- I feel a bit bad about kicking an Avs team while they're down, but somehow Colorado has avoided this sort of subjugation over my blogging career.  There's a first time for everybody, I guess: 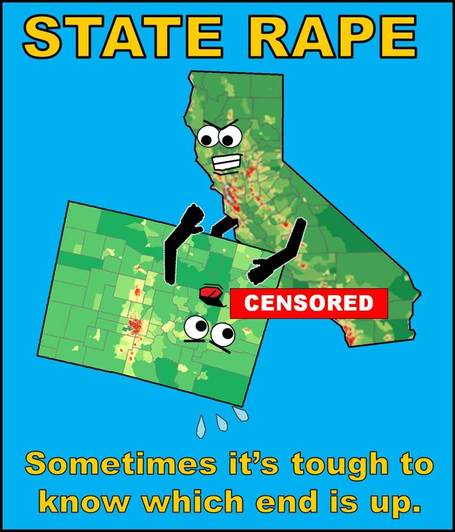 Prediction: Ducks win one for Winchester.  Goals by Marchant (a scoring streak would be amazing), Lilja, Teemu, and B-Ry.