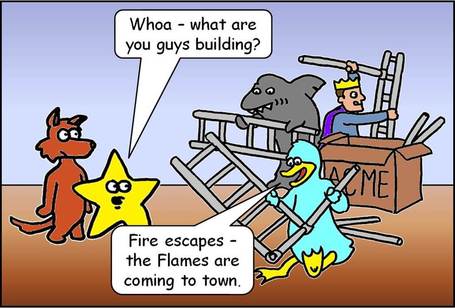 It's not impossible that by the end of tonight the Pacific Division sits at 3-4-5-6-7 in the west.

The Flames are in their must-win mode.  They started today one point out of 9th but with fewer games to play than anybody around them, and they're entering the dreaded California road trip. M&G breaks it down:

Here is your point program for the six possible points in the California road trip.

0-1pts – The Flames are out – crack the beers and drown the sorrows.

2pts – The Flames remain on the edge but will need 2 of the 5 teams in the hunt to stumble.

3pts – The Flames are treading water - barring three point games from the competition it looks the same as it does now.

I'll be around tonight -- go drama!