Here's a four-team subset of this morning's western conference standings, with Anaheim having ten games to go.  The column on the right is "regulation + OT wins", which will be the main tiebreaker at the end of the season -- Anaheim looks to be in good shape there.

And wouldn't you know it -- the Ducks start out on a road trip that stops in Dallas tonight, Nashville tomorrow, and Chicago on Saturday -- seems pretty huge, eh?

I tried to think of a classic movie showdown -- The Matrix will do.

I should be around tonight -- stop on by for game comments.  After the jump, some shot differential perspective!

Nothing too eye-opening today, but I decided to take a quick look at playoff teams since the lockout and how their shot differential looked over the regular season.  80 teams have made the postseason since the lockout; 39 of them outshot their opponents over a season by more than 100 shots.

The Ducks this season are quite the opposite of that -- through 72 games, the Ducks have 2,050 shots for vs. 2,336 shots against (-286).  Projected to 82 games, that would mean that the Ducks will have been outshot by about 325 shots over the course of the regular season.  That's pretty extreme -- only one team, last year's 8th-seeded Colorado Avalanche, qualified for the playoffs with a worse shot differential; they were outshot by 342 shots.

I've plotted out all 80 post-lockout playoff teams below, with a red dot representing where Anaheim projects to end this season -- if the Ducks do qualify this season, it looks like it could be a real Cinderella story. 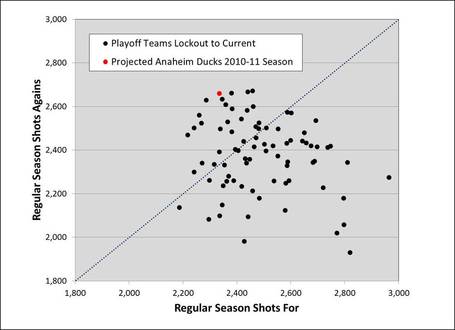 Anyways, just something to think about as the Ducks run through their set of hero-come-lately goaltenders.  Hell, even Jonas Hiller is coming along this road trip -- the drama never stops.

Prediction: The Ducks fail to yank Kari Lehtonen in the first six minutes of tonight's game, and as a result Anaheim plays an overall-more-competent game.  Still, because it's the "3 points for everyone" western race, the game goes to overtime, where Saku Koivu becomes the hero.