Back to Hollywood for inspiration for today's cartoon... 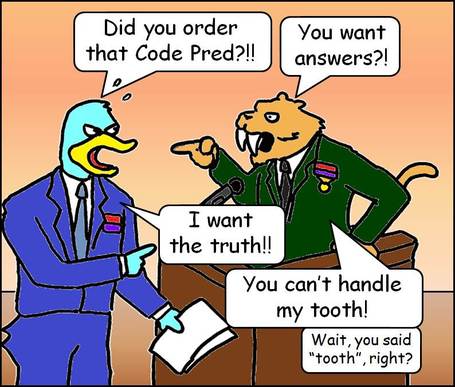 After a few cartoons in a row involving a Predator, I think I'm getting better at drawing them.

Speaking of Hollywood inspirations, jeez -- another incredible ending last night, with the Ducks stealing another two points from Dallas.  Two points I wanted to make today after the jump, though I'm a bit short on time -- feel free to discuss either of them in the comments:

* It's tempting as a Ducks fan to look at the standings and feel cheated by the lack of Overtime Loss points -- Anaheim is last in the west with only five.  But that's not really an accurate way to think about it -- it's not that Anaheim is being cheated by the system; rather, it's the other way around.  The Ducks are 9-3 in overtime and 4-2 in shootouts; their excellence in these areas, while it doesn't carry over to the postseason, is going to be a really key factor in them qualifying (both with standings points and with tiebreakers).

Too often people think about the "loser point" as being the extra point awarded in a three-point game, but it's really the "winner point" that is awarded based on 4-on-4 and 1-on-0 sideshows, and the Ducks are getting way more than their fair share of these bonus points.  Especially lately -- Ducks have won 10 of the past 11 games that have gone past regulation, which is pretty amazing.  Sure, the Ducks could have more OTL points if they were a .500 team past regulation, but if that were the case they'd be sitting two points back of Calgary this morning in tenth.

Now normally, I wouldn't want to be a team that makes the playoffs because of their overtime/shootout success -- those skills won't have much use in the playoffs -- but in this year's madhouse west, there are no useless standings points.  Keep it up, Ducks!

* I don't want to say this the wrong way, but it's very possible that this season has been saved by Jonas Hiller's mysterious case vertigo.  Before Emery or Ellis made their Ducks debut, Anaheim was outshot by an average of 27.9 to 33.0 (-5.2) -- they were relying on their goaltender for wins, rather than winning for their goaltender.  Since the "E" goalies entered the picture, the Ducks have produced much more respectable results, outshooting their opponents by an average of 31.3 to 28.8 (+2.5), and picking up a fairly lucky record of 9-2-1 (I say "lucky" because the Ducks have only outscored opponents 32-29 in regulation over that stretch).  And that's with half the games going into overtime -- the shots-allowed-per-game totals have been much improved.

Had the Ducks not improved their play in front of Hiller's replacements, it's tough to envision them sitting where they currently are -- had Ellis and Emery been .500 goaltenders over the past dozen games, for example, the Ducks would be five points behind Calgary in tenth this morning.  With Hiller set to return to the playing lineup possibly as early as today, it'll be interesting to see if the Ducks' focus remains -- Anaheim skaters have stepped up their collective game in his absence; if they can continue their competent play while he's in the net, watch out!

Prediction: I'll be around for the start of tonight's game, but then it's off to choir practice karate school inner-city crime fighting.  Ducks win this one in regulation for a change; game-winner by the Sex Offender.