As you hopefully know by now, I pay embarrassingly little attention to Ducks prospects and farm clubs -- if it's not on my TV, I'm oblivious -- but sometimes minor league rumblings become impossible to ignore.  This past Wednesday, Syracuse Crunch owner Howard Dolgon spoke out against Anaheim's assignment of prospects Joel Perrault and Jason Jaffray to the Manitoba Moose, and it was pretty scathing:

We are proactively addressing the recent actions of our NHL affiliate, the Anaheim Ducks, including the two recent player assignments to another AHL franchise.  Our singular focus is the performance of our team on the ice, and to provide our fans with the enjoyment and unique fan experience that is consistent with the support that they provide to our organization.  Character is an essential element of everyone associated with the Syracuse Crunch and we expect the same character, integrity and honorability from outside parties that are affiliated with our organization.

Damn.  Now I haven't done any proper follow-up research or anything, but that doesn't mean I can't draw a cartoon: 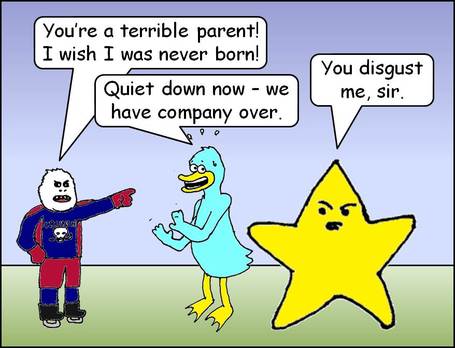 Confession: I have no idea what the "Crunch" mascot is supposed to represent.

That's it for me this lazy Friday, though I should be around for game comments tonight.  Hooray!

Prediction: Because of the linear nature of benches, the Stars align tonight.  Goals by Perry, McMuffin, and Winchester Abbey (still got to figure out what to call this guy -- suggest away in the comments).