Share All sharing options for: Ducks Gameday -- The Trial of Jar Jar

Game Five: (5) Nashville Predators at (4) Anaheim Ducks , 7 pm
Series tied 2-2.
On The Forecheck and Anaheim Calling -- go see what Anaheim's next suspension will be about!

Sigh -- how did I know back when we acquired Jar Jar that this cartoon would one day come true?  Of course, I assumed back then that he would earn his suspension through traditional thug methods instead of the NHL inventing reasons to punish the guy, but hey -- it's a creative fucking league. 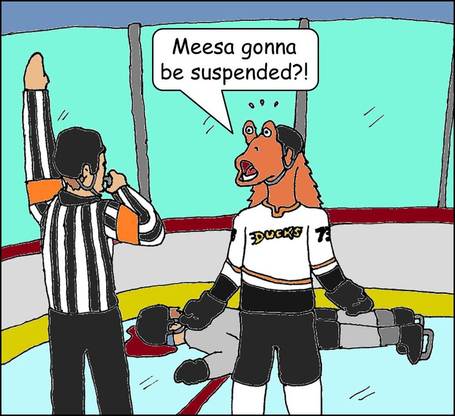 Speaking of creativity, through some BoC-devious methods, I was able to obtain a transcript of Ruutu's pre-suspension hearing with NHL Disciplinarian Colin Campbell -- well, it's not a transcript really, more of a sequenced record of events.  It's recorded in kind of an odd format, but I found the account interesting, at least:

1 Then the Nashville media led Jarkko off to Colin Campbell. 2 And they began to accuse him, saying, “We have found this man guilty of injuring our superstar.  He went after his head, I think, and it occurred at least nine frames too late.”

3 So Campbell asked Jarkko, “Are you the king of the Goons?”

“You have said so,” Jarkko replied.

4 Then Campbell announced to the team representatives and the crowd, “I find no basis for a suspension against this man.”

5 But they insisted, “He injures people all over the ice by his elbows. He only plays six minutes a night.  He has a violent history.  Watch the video again.”

13 Campbell called together the team representatives, the reporters, and the people, 14 and said to them, “You brought me this man, the one who injured Nashville’s leading scorer.  I have examined his collision in your videos and have found no basis for suspension. 15 Neither have the on-ice referees, for it was a linesman who made the call.  As you can see, he has done nothing to deserve suspension. 16 Therefore, I will have him serve two minutes for interference and then release him.”

18 But the whole internet shouted, “Suspend this man!  Release Torres to us instead!” 19 (Torres had been reviewed for a different questionable hit.)

20 Wanting to release Jarkko, Campbell appealed to them again.  "He was out killing a penalty in a one-goal game."  21 But they kept shouting, “Suspend him!  Suspend him!  Give us Torres!”

22 For the third time he spoke to them: “Why?  What crime has Jarkko committed?  His elbows were down and there was no contact with the head.  I have found in him no grounds for suspension.  Therefore I will have him serve his 2-minute minor and then release him.”

23 But with loud shouts and accusations they insistently demanded that he be suspended, and their shouts prevailed. 24 So Campbell decided to grant their demand. 25 He released Torres, the one they asked for, and sentenced Jarkko to suspension.

Sorry for the sacrilege, but I figured it was a timely tale of legal injustice.  :)  Join me in the game comments tonight for some Good Friday drama.

Prediction: Jarkko Ruutu is locked into a deep suspension until Easter morning, when Ducks fans wake to hear the good news: "He is eligible!"  "He is eligible indeed!"