Kings were rightly terrified of the great George Washington.

Derek Zona over at The Copper and Blue continues to do the serious blogging work that I should probably be doing instead of posting cartoons and YouTube videos. He is totally rocking this Sharks-Kings series and has been making detailed charts of the scoring chances after every game.

The scoring chances for game five were heavily in San Jose's favor, 23 to 8. Antti Niemi hasn't looked very strong in this series, and if he had been sharp on Saturday then game six might not have been necessary. That said, Jonathan Quick had his first outstanding game for the Kings in this series, so Niemi wasn't the only problem for the Sharks.

If Niemi plays a bit better tonight and the Sharks are able to replicate their game five domination in terms of shots and scoring chances, things should probably work out in San Jose's favor. I mean, just look at this chart of the Sharks' shots in game five: 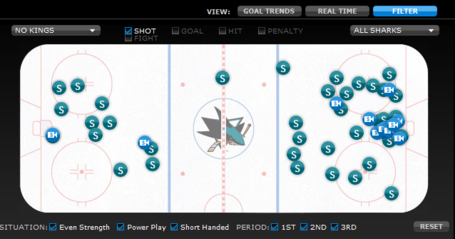 If the Sharks get to do this again tonight, I like their chances just fine.

The big question going in to this game centers on Niemi. Should he start tonight? Sure, let's try that. That's what's going to happen anyway, so let's be positive about it. Niemi is awesome, but hasn't had an amazing game yet for the Sharks in this series. Tonight could be the night. I don't really buy the "he's tired" argument, since he played for basically three months straight without showing much fatigue - why would a fourth month be too much?

Antero Niittymaki is a good goalie too, and has been solid in his relief appearances - but he's not Niemi. The Sharks got in to the playoffs on Niemi's back, and I don't believe he's suddenly unable to take the team any further.

Look at it this way, folks - Jonathan Quick gave up six goals in two straight games and then kicked ass in game five. Now it's Niemi's turn.