As was pointed out last summer, the Sharks, Kings, and Ducks all enter this postseason with eleven franchise playoff series wins -- now it's an open BoC Race to Twelve (or if we're damn lucky, Fifteen).  We'll know a lot more about seedings and opponents after tonight, I think, but for now... 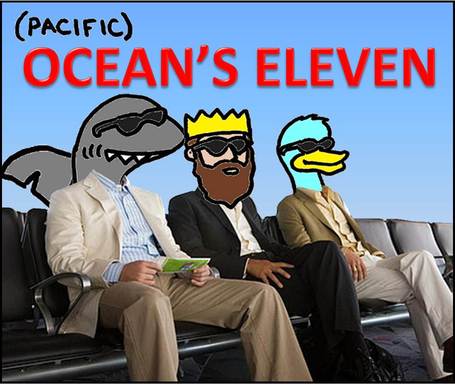 Not my best, but it's Saturday.

Here again is the rundown of all three franchises' eleven playoff series wins.

Lots of good memories there.

And heck -- I even got free artwork in my inbox!  Hooray!

Credit to Curt at Shark-tank.tumblr.com

Prediction: I should be around tonight -- stop on by for some end-of-season drama.  The Rat forces Rudy to buy his roommate a handle of liquor.