With the 22nd fake pick, the Ducks select...

Share All sharing options for: With the 22nd fake pick, the Ducks select...

SB Nation's NHL contingent is running a mock entry draft, and since I openly know nothing about pre-NHLers (even ones that have already been drafted by Anaheim), I figured this would naturally fall into Arthur's court over at Anaheim Calling.  He knows prospects like I know A-Team episodes -- that is to say, more thoroughly than is probably healthy.

But after 21 fake picks were made, Arthur was nowhere to be found, and the e-mail group started grumbling.  I texted him to make sure he was alive and to reiterate the disparity of our prospect knowledge; Arthur responded that he was too swamped to participate, and he foolishly handed the fake GM reins over to me.  Whoops!

Anyways, here's the 21 selections that had already been made; note that I'm so prospect-ignorant that I've never heard of any of these kids, but I've linked to each of their draft selection posts.

Unwilling to put up any research of my own, I begged the SBN hockey group to narrow the field down to a handful of suggestions (excluding goaltenders), then I very unscientifically selected the coolest-sounding name I saw: 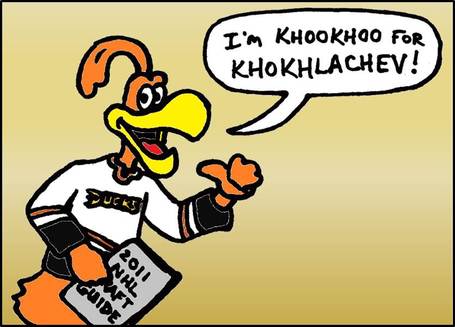 Now that I've drawn this, the Ducks definitely won't draft him.

As usual, all I've got is this cartoon, so here's some link-quotes for ya.  First off, The Cannon offers a solid compilation of scouting reports, including their own take -- look there for some YouTube highlights. as well:

When I've seen him play he reminds me of Maxim Afinogenov, with the exception of the latter's non-existence in the defensive zone.  The concern for me is that he will be a perimeter player, and the rigors of the NHL may make him a prime candidate to return to Russia to forge his career.  That said, he has shown commitment to North America, as evident by making the move to Windsor to play in Canadian junior.  If he can become more involved physically, he will have a succesful NHL career as a second line offensive threat, dominant on the powerplay.

Matchsticks and Gasoline offers an interesting take about his relatively young age within the draft year, and how that translates on the Jeff Skinner Rankings (JSR).

He's young for his draft year: a September of 1993 birthday, he barely makes the age cut.  And despite this, despite the fact that he's now only played one year of North American hockey, Khokhlachev has put up a very respectable 76 points in 68 games in the OHL, with another 20 in 18 in the playoffs.  How good is that, relatively speaking?  Well, the JSR has him as the second best draftable forward in Junior this year (two 2012 draftees are ranked as 1 and 2) behind only Ryan Strome.  That's pretty good.

And finally, here's a nice look at two Russian draftables ("Khokho Puffs" plus Vladislav Namestnikov) from From Russia With Glove:

Khokhlachev’s foot speed is no where near as fast as Namestnikov’s but his simple style of game, high hockey sense, and fantastic passing abilities make Khokhlachev a desirable target in this year’s draft.  His deceptive quality is his finishing abilities.  It often gets overlooked with how well he can set players up, but his wrister is blistering.  His skating is flawless, and he is able to break down plays so well to create offensive chances.   As with Vladislav, Alexander also lacks the physical presence and will need to tack on some mass in order to exceed at the next level.

General managers don’t have much to worry about in terms of the "Russian Factor" with these two prospects as they are taking a page out of Burmistrov’s book and making the move to North America to pursue the dream of playing in the NHL.  I fully expect both to be selected within the first two rounds of the upcoming draft in June, and in all likeliness, both maybe be taken within a handful of picks from each other.

So there you have it, draft-heads.  How'd I do?  Actual entry draft starts this coming Friday, just in case it never gets mentioned on this blog again.  :)