BoC Playoff Pick'Em: It's Over!

Share All sharing options for: BoC Playoff Pick'Em: It's Over!

Hey did you guys know that the playoffs ended like a couple of weeks ago?

The Bruins won the Stanley Cup in seven games, and that means that our glorious Battle of California Playoff Pick'Em season is now at an end.

We have a winner! I probably should have come up with a prize or something by now, huh?

Results after the jump. 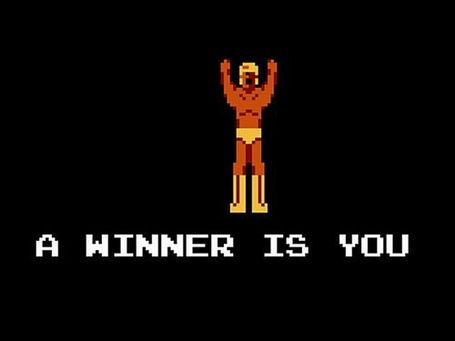 Yes, in a controversial outcome with all the bitterness and suspicion of the 2000 U.S. election, one of the very people that graciously (pun!) volunteered to organize and tally all the submitted votes turned out to be the winner!

Ain't that a kick in the nuts?

Congratulations to everyone in the top eleven: you are all winners, in all senses of the word except for the only sense that matters.

Picking the Bruins to win the Cup way back in the first round was pretty ballsy, but it really paid off for a few of you. Good work, you crazy bastards.

So anyways, I said there would be some sort of prize, but I'm also really poor and I'm not about to waste money on this sorry excuse for a blog, so here's the deal. g r a c e, if you so choose, you can pick any of the following as your reward:

1. Tell us your favorite player, and I will write an epic poem celebrating him and post it to the blog.

2. Write a bragging speech celebrating your victory and it will go up on the front page of the blog.

3. Describe a picture you'd like to see, hockey-related or not, and I will MS Paint it and post it on the blog.

Thanks for playing, everybody. Feel free to bitch and argue about the scoring system in the comments to this post.