(Taps the microphone) Is this thing on? Ok then. You're probably wondering why I'm posting instead of BoC commentary on Brent Burns/Mike Richards or Rudy on how much he hates Ryan Smyth.

Well, retirement announcements usually occur back at the home venue, right? Since From The Rink folded into the SB Nation Hub, I may have posted the same quantity of material but it doesn't quite feel like a blog home. So I'm back at my home-away-from-home here at BoC to announce that for the first time since 1998 -- yes, 1998 -- I won't be writing regularly about hockey come October.

1998 you say? What kind of crazy world did we live in back then?

In 1998, Byran Dafoe was the Boston Bruins starting goalie, the Phoenix Coyotes played at American West Arena with 1/4 of the crowd watching an obstructed view, and the Columbus Blue Jackets didn't even exist yet.

In 1998, Bill Clinton was president and we were more concerned with the definition of "it" than global terrorism or a sluggish economy.

In 1998, the original Playstation was video game king, Britpop was still a viable (but dying) music genre, and The X-Files was the best show on TV.

In 1998, I wrote my first article about hockey. I was a junior at UC Davis, and having just come off a creative writing course, I had the itch to continue writing. Even at that time, I devoured hockey news online -- for a long time, one of my favorite sites was NHL Papers, which linked to each team's local papers. It had its own set of links on there, one being a site called High Cheese Sports. Dumb name, yeah, but it was the first news aggregator I'd ever seen -- essentially Kukla's Korner before KK existed. HCS was also looking for columnists for each team to go along with the news feeds. On a whim, I wrote a sample piece about the San Jose Sharks and the rest is cyber-history. Weekly HCS columns folded into Pro Sports Page, which folded some time later; after that, I wrote for The Feeder (now www.letsgosharks.com), along with random sports sites around the web, most of which don't exist anymore.

And in 2004, I started my own freelance writing business. My web designer at the time suggested I start a blog for my new business site, simply for helping out with my site's search engine score. Several weeks in and I got bored writing about small business topics, but that NHL lockout sure provided plenty of fodder. Someway, somehow, people actually found my site and what was once my small business blog experiment became "Mike Chen's Hockey Blog."

Fast-forward some seven years and some ungodly number of posts and articles, and all of this is coming to a close. 13 years is a long time to commit to anything, let alone several posts/articles a week, and I think it's time to hang up my blogging skates.

It's been a very strange and pretty cool journey for me. From the eponymous hockey blog, Lyle "Spector" Richardson recommended me for Fox Sports contributions. Then I somehow stumbled into the madhouse known as Battle of California and soon after, I had a run at Kukla's Korner; at the same time, I contributed to Versus.com and had other one-off contributions appear at The New York Times Slap Shot Blog, NHL.com, and other random spots. And of course, when James Mirtle moved on to more professional pastures, John Fontana of Raw Charge approached me with the idea of taking over From The Rink. Managing a staff and schedule at FTR was more difficult than I had anticipated but I still think we unleashed a lot of good content across a number of writers. It's unfortunate that the public archive of FTR still hasn't been launched; I loved that Ebay's Strangest Stuff post with the infamous Spider-Man Florida Panthers jersey.

There were radio appearances around the continent, including regular spots on The Team 1200 in Ottawa (where the great Lyle Richardson called me a pussy because I was complaining about a cold California night). Hockey Night In Canada did an intermission feature on hockey blogs, and my site was featured in a blink-and-you-miss-it moment. During the Vancouver Olympics, ESPN's SportsNation gave FTR some love with a "Site We Like" spot (still on my Tivo). With Fox Sports, Kukla, and SBN to my name, I found it easy to approach teams about interviews, and some of my favorite highlights include an hour-long Q&A with Doug Wilson, Boyd Devereaux detailing his indie rock label, talking guitars with Sean Burke while contractors worked on his house, and an email Q&A with Wayne Gretzky. Those are things I'd never even dreamed of when I first tried to figure out blog software. It's even helped out with the business end of things -- hockey fans stick with each other, so it's helped me win projects from time to time. It also impressed the hell out of my cousin-in-law, who currently plays with the Junior Sharks.

But the burnout monster always loomed over the past few years, usually from March onward. This year's burnout felt particularly stronger. Maybe it was just due to the inevitable mileage of, you know, writing several zillion words on one topic since 1998. Whatever the case, that itch to write something about the NHL seemed to go away, especially as hockey responsibilities started to eat up time I wanted to devote elsewhere.

So once the hockey gods decided to smite the San Jose Sharks with the weirdest, worst series-clinching goal of all time, I took a few days before committing to the decision to end day-to-day blogging. I informed Travis Hughes about it on the eve of the Stanley Cup Final, then stuck with my responsibilities to provide post-game coverage for SB Nation. And once Zdeno Chara did his Godzilla-lift of Lord Stanley, I pounded out 600 words, hit Save, and that was that.

I'd post a few Greatest Hits links but unfortunately much of my work is in limbo. Most of my original hockey blog archives were wiped out by The Worst Web Host Ever during a server crash and FTR archives probably won't be made public until later this summer. However, here are some of my favorites during my time at Kukla's Korner.

Jeremy Roenick & A Lifetime Of Memories

What Does Gary Bettman Actually Do?

I won't be going away completely. Of course, I'll be here at BoC for comment-thread fun and probably the occasional rant, and I've already agreed to help out SB Nation with things like season previews. I'll show up at random places for a contribution here or there (I've already agreed to write a feature piece for Maple Street Press' Pittsburgh Penguins preview magazine). I've also kicked around the idea of possibly doing a monthly feature-length piece at SB Nation -- something that lets me stay involved with hockey writing while removing the pressure of daily deadlines. And if you're curious, I'll still be writing video game reviews at RotoRob. I'll also be devoting more time to fiction writing, and blogging more regularly about publishing -- something I've kept fairly separate from my hockey writing.

But for the most part, I'll finally be able to detach myself from the NHL and just enjoy it as a fan without thinking about daily or weekly deadlines anymore. It's been so long since I've been able to do that I can't even remember what it feels like.

The list of people to thank is long but you only do this once (unless you're Dominik Hasek), so here goes. Thank you to:

The people who gave me a platform: Paul Kukla, Lyle Richardson (who hooked me up with Fox Sports), Brandon Worley/Travis Hughes (my editors at SBN)

BoC and friends: Earl Sleek, PJ Swenson, RudyKelly,  Megalodon, James O'Brien, and all of the wacky commenters that make my workday better. And yes, Cheechew still exists, and I talk to him on a regular basis. He will even be there to witness what I consider to be the dumbest decision of my life -- trying to eat 61 chicken mcnuggets. This skinny Asian guy is in way over his head, but when high school friends make a challenge, it must be taken!

Cool people I've "met" through hockey blogs: Christy Finn, David Lee, Chris Young, Dan Legroulx, Alanah McGinley, Christy Hammond, Donny Rivette, Sherry Jean, Steve Lepore, Chris Wassel, Dirk Hoag, Jason Plank, Patrick Hoffman, Paul Becker, Sam Fels, Connie Kim, all the wacky writers at SB Nation and I'm sure other people that I will edit on here later. If there's one truth about the hockey blogging community, it's big and tight-knit. We may not agree on the same team, but our mutual love of the greatest game makes us infinitely cooler (and better looking) than other sports fans.

My wife Mandy deserves a mention. On our first date, we had opposing views on Peter Forsberg -- I called him one of my favorite players, she called him a "spleenless diving sack of shit," and yet we married five years later. Go figure. She knew I loved hockey but I don't think she knew just how much it was involved in my life, so a shout-out for patience and listening to the "But I have to watch Columbus vs. Florida, I have to write something tomorrow" excuses for so many years.

Last but not least: all of the companies that gave me free hockey-related swag over the years. Free swag is great!

You guys are awesome. I love you like I love Patrick Marleau's awkward smile, and thanks for everything. I'll be around if anyone wants to talk indie rock, video games, or Star Wars.

And finally, for the BoC faithful...my cat Akasha is way cuter than Meg's cat Chandler. (If you're linking into this post from elsewhere...um...don't even ask.)

Her St. Patty's Day hat is much more bad-ass than Chandler's sweater. 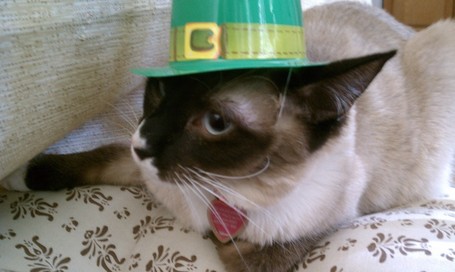 Not only does she have bright blue eyes, she watches hockey regularly. Seriously, she does. I think she thinks the puck is a bug or something because she tracks it from left to right. 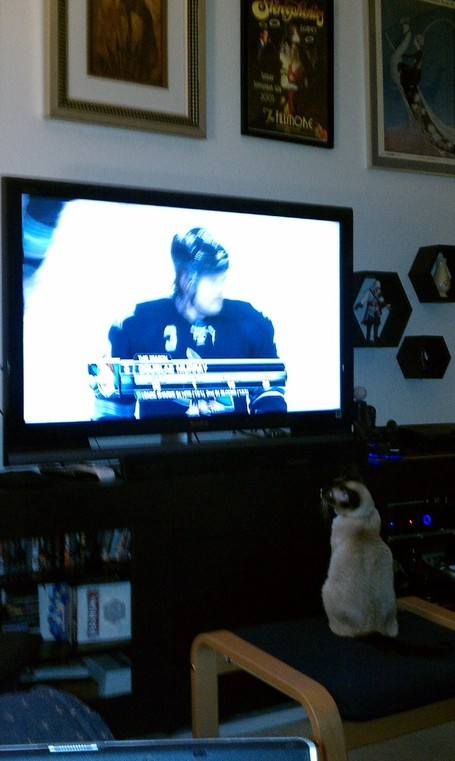