Share All sharing options for: We're All Doomed, Revisited

Back in late August of last year, Rudy and I collaborated on a hilarious and heart-warming post sort-of satirizing the prediction posts everyone does before the start of the season. It was called "We're All Doomed" and it detailed the reasons why every single team was going to have an awful year.

Now, with the 10-11 season well behind us and the 11-12 season just a distant light at the end of the tunnel, it's a good time to revisit last year's predictions. Though the predictions we made were all jokes, I still think we had an accuracy rating fairly comparable to any major sports media source.

I'll repeat each prediction here and grade it for accuracy on a scale I'll make up as I go along, because basically everything I write is a ripoff of/tribute to Seanbaby.

Atlanta Thrashers: So they added Byfuglien and Mason. That's something, anyway. They're certainly not as awful as they once were, for what it's worth. And what it's worth will be about 11th in the East.

Accuracy Rating: Excellent. The Thrashers finished 12th in the East, behind the Devils by a single point. They made some impressive moves in the off-season last year but it all amounted to nothing, just as we suspected would be the case. At least now they'll be able to attract better free agents with the exciting prospect of playing in Winnipeg!

Boston Bruins: After making history with their spectacular failure in the playoffs last season, this year the Bruins will discover exciting new ways to completely suck. They'll tie for the division championship at the end of the year but, with the new tie-breaker system disregarding shootout wins, will end up missing the playoffs entirely.

Accuracy Rating: Not good, although at times during the playoffs the Bruins seemed to be trying their best to live up to our prediction of their incompetence. Hopefully everyone remembers how lousy the Bruins looked for much of the first three rounds, because it makes their victory over the Canucks even more hilarious.

Accuracy Rating: Okay. The Sabres and their sweet-looking jerseys were gone after the first round of the playoffs.

Carolina Hurricanes: After coming close last season, the team will finally break their franchise record and go on a fifteen game losing streak.

Accuracy Rating: Funny, but poor*. The Hurricanes didn't have any losing streak longer than four games during the season, which is good. But they also hardly ever won more than one or two games in a row, so they still missed the playoffs.

Florida Panthers: This season the Panthers should be the 3rd best hockey team in Florida.

Accuracy Rating: Excellent. If this one could possibly have come true, it would have. The Panthers finished dead last in the East, more than THIRTY POINTS behind Tampa Bay (and ten points ahead of the Oilers).

Montreal Canadiens: The Canadiens have one thing going for them: great goal-tending. If it weren't for Halak, this team would be completely hopeless.

Accuracy Rating: Bad. Although the Canadiens did still suck fairly hard a lot of the time, goaltending wasn't their problem. They finished 8th in the league for fewest goals allowed.

New Jersey Devils: Thanks to the Kovy contract controversy, every ref and linesman in the league will be entering the season with a predisposition to see the Devils as cheaters.

Accuracy Rating: Not really. The Devils failed spectacularly, but it had little to do with what cheating bastards they were during last year's off-season.

New York Islanders: The big question: Is Jonathan Tavares good enough to lead this team into the playoffs? The big answer: not even close.

Accuracy Rating: Totally. Tavares had 67 points, good enough to make him 28th in the league. He was also -16, which made him 853rd. The Islanders, as expected by everyone who has ever heard of hockey, were awful.

New York Rangers: It may not actually be a good idea for an entire team to climb onto Marian Gaborik's back. He might break something.

Ottawa Senators: Everybody is good at something, but for this team hockey doesn't seem to be it. Maybe they're all excellent Mathletes?

Accuracy Rating: Yup. The Senators missed the playoffs. What a shocker!

Philadelphia Flyers: Chris Pronger is coming back from knee surgery, and his return date is uncertain. Hmm, a giant guy playing a punishing sport heading towards the later years of his career - he should be back in a jiffy with no lingering effects whatsoever.

Accuracy Rating: That's a bingo. Pronger played fifty games during the season and was severely limited by injury during the playoffs.

Pittsburgh Penguins: In the playoffs this team couldn't beat the Canadiens, so it will be a real struggle playing against actual NHL teams.

Accuracy Rating: Good job. This one was pretty spot-on, though no one could have predicted Crosby's injury or that Tampa Bay would become an actual NHL team again.

Tampa Bay Lightning: The Lightning are going to be in big trouble when Dan Ellis quits hockey in favor of a career in brain surgery.

Accuracy Rating: Awful. Not only were the Lightning fine after they shipped Ellis off to some stupid team in the West, the joke in the original prediction wasn't even funny.

Accuracy Rating: Mostly. They missed the playoffs of course, but they finished just high enough to make sure their first-round pick wasn't that great. But of course they sent that pick to Boston in a trade, so good work Toronto, I guess.

Washington Capitals: You know what this team needs to finally get some success? An offensive superstar. That's the missing piece.

Accuracy Rating: No. The Capitals actually became a much more well-rounded team this year before crumbling before the might of the Lightning in the playoffs.

Anaheim Ducks: The team that finished 11th in the West last season has lost Scott Niedermayer and added...um....

Accuracy Rating: Spade**. The Ducks managed to finish 4th in the West due to a combination of Corey Perry and Teemu Selanne both playing far better than anyone had a right to expect. 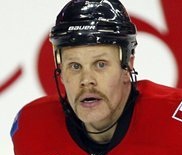 Chicago Blackhawks: You know that team that won the Cup because of their insane forward depth? About that...

Accuracy Rating: Decent. They barely made the playoffs and lost in the first round, but forward depth wasn't really their problem.

Colorado Avalanche: Craig Anderson will be unable to stand on his tiny pea head for a 2nd consecutive season.

Accuracy Rating: Amazing. In 33 games with the Avalanche Anderson had an .897 save percentage and a GAA of 3.28. The Avalanche shipped him to the Senators and he started playing a bit better, but the Avalanche did not.

Accuracy Rating: One thumb up. Kari Lehtonen started 68 games for the Stars, more than predicted, but he did have spectacularly average stats.

Detroit Red Wings: Tragedy will strike when Todd Bertuzzi accidentally eats Pavel Datsyuk's head after mistaking it for a piece of candy corn.

Edmonton Oilers: Fans in Edmonton will be shocked when they see their team at the top of the standings, but it will turn out they're just holding the newspaper upside-down.

Accuracy Rating: Boom goes the dynamite. The Oilers were dead last in the league, making this joke perfect.

Los Angeles Kings: The signing of Willie Mitchell will amount to nothing when he injures himself during the national anthem at the season opener and doesn't play a single game.

Accuracy Rating: Sorta. Willie played 57 games during the season, which isn't that bad for an injury-prone player. We were totally right about injuries being a problem for the Kings though, so we should get points for that.

Minnesota Wild: Martin Havlat, Mikko Koivu and Nicklas Backstrom will make a combined $17.75 million in 2012-13. I don't even have a joke for that.

Nashville Predators: They'll set an NHL record for the most players with 10+ on goals on one team with 15, and they'll set another record when their leading scorer only has 11.

Accuracy Rating: Eleventy. The Predators had nine players with ten or more goals on their team, and their leading scorer managed 23.

Phoenix Coyotes: Coyotes fans have been insisting for years that Zbynek Michalek is under-rated, and is one of the top defensemen in the league. Without the rest of the Coyotes dragging him down, it will turn out the fans were right all along.

Accuracy Rating: Nah. Michalek wasn't that great on the Penguins, and the Coyotes managed to make the playoffs.

San Jose Sharks: After yet another season goes by without playoff success, the Sharks are going to have to face facts: it's all S.J. Sharkie's fault. Get him!

Accuracy Rating: Painful. Substitute Setoguchi and Heatley for Sharkie and this is exactly what happened.

St. Louis Blues: A quick start will fizzle out after Erik Johnson shreds his arm while trying Frolf.

Accuracy Rating: Unknown. I'm too lazy to check if the Blues actually had a quick start or when during the year Johnson was injured, but he did only play 55 games and was traded to the Avalanche at some point. Research is for losers!

Vancouver Canucks: They're actually in really good shape, but I'll be a monkey's uncle before I ever take these two idiots seriously: 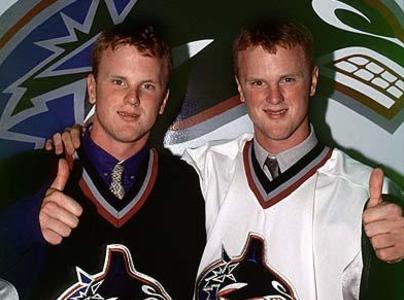 I think we did pretty well, all things considered.

P.S. Have you voted for my story yet today? Only three more days!