Share All sharing options for: Oil Embargo vs. Oil Dependence

Dean Lombardi is not happy with the Ryan Smyth trade.  Understandably so -- even with his hands tied, he still got stuck with an injured Colin Fraser.  But he may have gone overboard with this snipe: "The bottom line for me, I would have rather invested my money with Bernie Madoff than invest in Edmonton's word."  That's a pretty harsh soundbite -- I can't imagine the Kings and Oilers will be trading with each other anytime soon.

Of course, that was true of the Ducks and Oilers not that long ago, and look at us now -- Anaheim and Edmonton can't stop trading with each other!  Bob Murray exchanged Ryan Whitney for Lubomir Visnovsky late in the 2009-10 season; this summer he's flipped Andy Sutton for Kurtis Foster and then days later a 2nd-round pick for the rights to Andrew Cogliano.  Plus he's signed 2 other ex-Oilers for AHL jobs as well -- Jean-Francois Jacques and Jeff Deslauriers.

It's almost as if Edmonton is supplanting Syracuse in terms of developing young talent for the Ducks.  :) 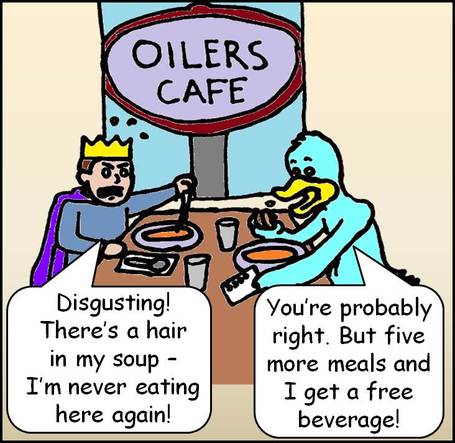 No real point to the post other than to set up the cartoon, obviously.

I really don't know who's got the right approach -- on the one hand, Anaheim is sure taking on a lot of castoffs from a perennially-30th-place team, though they do come pretty discounted because of that.  The Kings may or may not improve on their Smyth trade return, but they'll probably get blacklisted down the road as young players get squeezed out of Edmonton's system.

Which team has the better approach?  Feel free to think it over and then cast your vote here.