Share All sharing options for: Lines & Tigers & Bears, oh my!

I'm sick of waiting to see if the Sharks make any more moves, so I'm going to talk about the forward lines right now. This post could become obsolete in an instant if the Sharks sign anyone worthy of playing on the top three lines, but it's either this or more Goosebumps stories so here we go.

Joe Thornton is a lock to be on the top line, obviously, but after that things aren't set in stone. Patrick Marleau is the most likely left wing, after the success the two have had playing together for most of the past two seasons. Joe's going to be the regular center for sure, but we can assume a bit more flexibility in his positional play than there was in the past.

Towards the end of the past regular season when Joe was a bit hurt he stopped taking face-offs and ended up playing more of a left-wing role, using his big reach to handle more defensive responsibility and generate takeaways. This experiment generated some nifty opportunities with Boyle jumping up into the play (see the videos towards the end of this post for examples). It's unlikely the left-wing/center swap for Thornton and Marleau will ever become a regular thing, but it's nice to know that the option is there.

The right wing on the top line is the biggest question mark for the team right now, with the two most obvious candidates for the role now freezing to death in Minnesota. My personal choice for the top line right wing would be newbie Shark Martin Havlat. Havlat is motivated to prove himself and his speed should be a good fit for Joe's passing ability. Patrick Marleau is a really fast player too, so those two on the wings for Thornton could make for an explosive line.

On the other hand, according to the closest we have to any official word on the lines, a brief mention in Working the Corners last week, the current thinking is that it would be better to split Marleau and Havlat up. According to David Pollak,

...the idea is to put a speed threat on each of the two lines [...]  Marleau on one line, Havlat on the other.

If this turns out to be correct, then the open wing on the top line will probably be filled by either Joe Pavelski or Logan Couture.

Joe Pavelski is a surprising choice. I wouldn't have even considered it a serious possibility if not for Pollak's article, since Pavelski's performance and style of play over the past couple of seasons seemed to make him a natural fit for the second or third line center position. Everything is really tentative right now, obviously, and the line information we have isn't anywhere close to "official" or anything, but David Pollak is a reliable reporter and he thought this was worth mentioning, so the option is at least being considered. The team has to think long and hard about moving Pavelski out of the center position though - he wins a lot of face-offs and was hardly ever shifted to the wing during the past season.

If it's not Havlat or Pavelski who plays on the top line, I'd expect it to be Logan Couture, under the "Logan is young so he won't mind if we make him play something other than center" clause. Couture and Ryane Clowe really meshed well together last year, so I'd be hesitant to break up that chemistry on the second line, but it's something that the team might want to try out given their current roster. Thornton and Couture together is not something we have seen very often at even strength - the two were never on a regular line together during the past season - so it's hard to predict how this hypothetical line would work out.

Finally, in my opinion the least likely potential candidate for the top line: some other guy. If the team decides against Havlat or Couture/Pavelski, and doesn't trade for or sign someone else, then they're going to play the "let's gamble on the next Jonathan Cheechoo!" game and put some random young guy up there and hope for some magic. Fear the Fin covered this possibility in detail, arguing that someone like Jamie McGinn could score around twenty goals playing with Thornton, and I certainly agree that isn't too far-fetched. 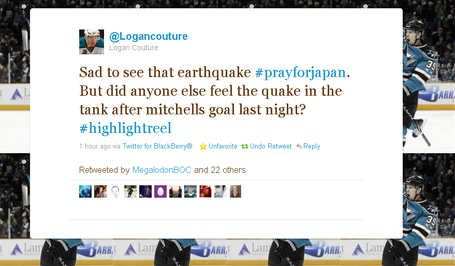 The second line last year was great once Clowe, Couture, and Heatley started playing together. At times, especially early in the playoffs, the second line was more dangerous than the top line, though injuries to Clowe and Heatley slowed everything down by the end of the Detroit series.

If Ryane Clowe continues to produce at the rate he did over this past season, he will most likely be staying on the second line. If for some reason his scoring takes a dive then he could potentially get dropped down to the third line - but let's hope it doesn't come to that.

The Sharks have too much depth at the center position and they're a bit thin on the wings, so somebody is going to have to move out of their comfort zone, and the second line is probably where this is going to happen. Joe Thornton is a lock for the top line center and Michal Handzus has "third line shutdown guy" written all over his goofy face. So we're left with two natural centers, Joe Pavelski and Logan Couture, who are both way too good to center the fourth line (there's also Torrey Mitchell, another center, but he's already been pushed to the wing often enough that re-positioning isn't an issue).

As previously discussed, Joe Pavelski has rarely been shifted out of his center position, so my first instinct would be to say that Couture will move to the wing, but that runs counter to what David Pollak reported as the rough-draft lines a week ago. If Pollak's top lines turn out to be correct, then Pavelski will move up to the first line and the second will be Clowe - Couture - and Havlat, which sounds sufficiently awesome to me. This configuration also has the added bonus of putting Havlat exactly where Dany Heatley was playing, so it will be easier to look at his performance and see which team ends up winning that controversial trade.

If neither Couture nor Pavelski gets bumped up to the top line wing then the second line should probably consist of Clowe as the left wing, Pavelski as the center, and Couture as the right wing. Couture's good enough and young enough that it would be worth giving him a try on the right side. If it works then you've solved the "too many centers" problem, and if it doesn't then let the line shuffling begin.

The best third line the Sharks had last season featured Torrey Mitchell, Joe Pavelski, and Kyle Wellwood. The three centers combined to make a puck-cycling machine that produced some of the best shifts for the Sharks in the first two rounds of the playoffs. Unfortunately, this line won't be returning this season. It doesn't look like the Sharks will sign Wellwood, and the acquisition of Handzus almost certainly bumps Pavelski up to at least the second line.

Mitchell will probably play one of the wings, Handzus will take the center, and the other wing is fairly open. Jamie McGinn could play here, unless something radical happens with the top two lines and someone like Clowe takes this spot.

While last season the third line provided a fair amount of scoring with Pavelski centering it for most of the year, this year we'll have Handzus lumbering around instead. Handzus isn't going to make a lot happen offensively (he only had 30 points last year despite playing a full season) and neither Mitchell or McGinn are likely to put up a ton of points playing with him as their center, so this is going to have to be more of a shut-down line than the Sharks have seen for a while. This could either turn out to be a great strategic asset for San Jose or a step backward for the team offensively, and I'm nowhere near smart enough to predict which it will be. 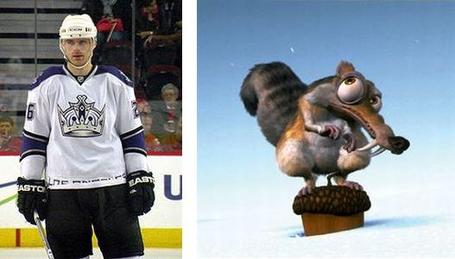 Handzus is supposed to be sort of a defensive specialist but the numbers don't necessarily back up his talents in this regard. At a certain point the dividing line between "defensive forward" and "guy who plays a lot but doesn't score" gets a bit blurry.

In other words, I'm a little worried about what's going to happen on this third line, but I'm hoping for the best.

The fourth line this season should just be a big chemistry set. Let's throw some stuff together and see what happens!

I really want Benn Ferriero to make the team, so I'm hoping he gets a regular spot on the fourth line. I've tried to convince myself that he really is one of the best young prospects the Sharks have but if I'm being honest I just enjoy that he looks like Keanu Reeves. Anyways, it's the fourth line so during the regular season it doesn't really matter that much. The Sharks will get reliable scoring out of their top lines and Dan Boyle and Brent Burns so they should take advantage of the opportunity and give young players a chance to establish themselves in the NHL.

Other guys that will probably get a chance on the fourth line include Andrew Desjardins, Brandon Mashinter, John McCarthy, and Tommy Wingels. TOMMY WINGELS! 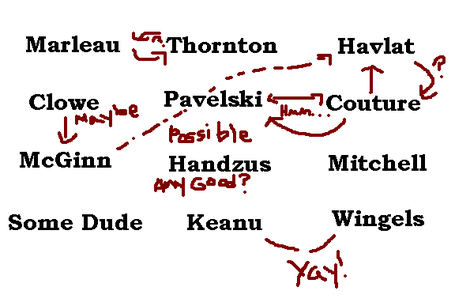 In conclusion, Libya is a land of contrast.