Ducks fans (not just Albert K) have been going varying degrees of stir-crazy this young summer, as Barstool Bob has actually decreased his opening-day salary with the Sutton-for-Foster trade, followed by nothing but quiet AHL signings in Gordon, Rodney, and Jacques (who?, who?, and qui?).

And I understand the frustration -- this team does need to get better, especially at the start of the season. But I think it's very important to remember why our spending hands are tied this summer: because of the key roster pieces we're keeping. The Ducks are hanging onto a top line that's the envy of the league -- three superstars in the primes of their careers all on fairly sweetheart contracts, coming off a Hart-Trophy-producing season. The Ducks are keeping the highest scoring defenseman in the NHL, one who was on the ice for more goals-for than any skater in the league last season. The Ducks are keeping the rest of their defensive core intact, including defensive stud Lydman plus they'll benefit from a full season out of Beauchemin and experience gained by Fowler and Sbisa. And, partially because his trade value is near-zero right now, the Ducks are keeping the western conference's only goaltender to make last year's All-Star Game.

Oh yeah, plus the Ducks have the inside track on last year's 8th-highest-scorer in the league, too.

Inactivity is not all bad news, Ducks fans. We know what the summer priorities are -- more competent third and fourth line depth -- and in order to retain the key pieces Anaheim has, it'll have to be done cheaply, at least to start the season. The first wave of UFA signings, as money-crazy as it was this summer, was not the way to do that -- not unless Barstool was finding a way to move a different contract out, I think. There's still plenty of summer left for more affordable signing or trading options (don't forget that Nashville's RFAs might become UFAs soon).

But let's play a hypothetical game today -- let's suppose for a second that Barstool Bob did want to make a big-money offseason splash, but being bound by a tight budget, it boiled down to a hard decision: what if he had to trade away one of these Three Stooges? 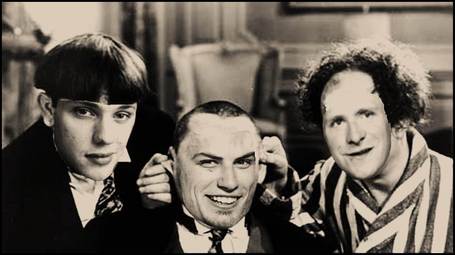 A little sloppy, but you get the idea.

Any one of these top-liners would yield a LOT in a trade, though of course each comes with its own public relations disaster. Some numbers and discussion after the jump, then of course there's a poll below (don't forget to vote on THIS, too!) -- even if you're not a Ducks fan, feel free to participate.

Just to get the math out of the way, here's what each player is currently owed on his existing contract (thanks, CapGeek!):

Interesting to note that in terms of cash, Perry will earn the least of the trio in each of the next two seasons. And here's each of their counting numbers from last season:

Phenomenal players, all three of them. So which would you trade?

There's no right answer here, I think -- each player has his own benefits and drawbacks. Bobby Ryan is the least accomplished of the trio, but he is locked in the longest contract; keeping B-Ry helps avoid the potentially-messy situation of trying to re-sign both Getzlaf and Perry in 2013. Corey Perry is the cheapest cash-wise of the three, but with the Hart Trophy win, he'd probably get the highest return on a trade -- perhaps it's wise to "sell high" with him. Ryan Getzlaf is the captain and probably has the most potential, but his game is sloppy in the details and there is a premium on top-line centers in this league -- he might be most difficult to replace.

In the end, this question might just boil down to "which player do you like the least in a Ducks sweater?", but feel free to rationalize your decision in the comments. And maybe this sort of mental exercise can help Ducks fans better appreciate that Barstool Bob so far hasn't been forced to make this decision. Yeah, it's a quiet summer, but I for one am glad it's not a crazy summer just for its own sake.

Just for further consideration, here's how BoC readers voted when I posed this question last summer:

I wonder how the results will look this time.