Share All sharing options for: The Top 5 Ovechkin Tweets

Alexander Ovechkin's Twitter is amazing. You can find it here and you should just go read the whole thing now, because holy crap is it ever great. He's constantly straddling that line where you're not sure if he's drunk, crazy, dumb, or just Russian.

Can Ovechkin possibly not know how insane and incomprehensible his tweets are? Is the whole thing just an elaborate joke on us stupid North Americaners? Quite possibly. And frankly, I don't care.

Here are the five best tweets Alexander Ovechkin has ever tweeted.

A DVD featuring Alex Ovechkin AND a guy with funny underwear? This is definitely going on the top of my Christmas list.

Ovechkin was at Semin's house, ready to kick some butt at a soccer video game.

The main reason I love Alex Ovechkin is that he frequently seems to be having a blast just being alive. The way he plays hockey, his goal celebrations, his Twitter...Ovechkin is a dude who enjoys being himself, and I respect and admire that. #champion

Here Alex is referring to his previous tweet, which was a long sentence in Russian. Ovechkin tweets in Russian randomly some times, and he almost always follows up by explaining that the previous tweet was written in Russian, as if we all would have been baffled if he hadn't explained that it was, in fact, in a foreign language.

The idea of Ovechkin going "he he he" makes me very happy.

This tweet came in the middle of a run of several tweets from Alex, but I can assure you it made no more sense in context than it does here on its own.

You're right, Alex. It is so good. 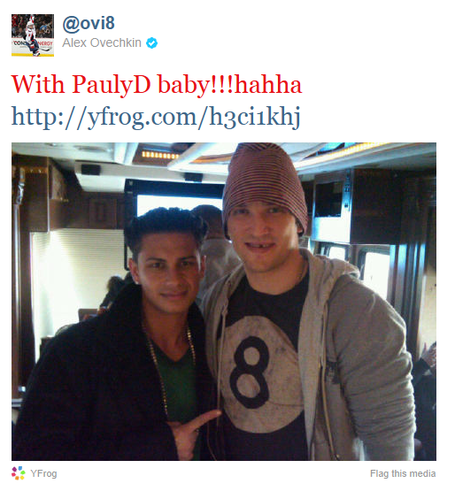 There are no words for this. Just look at it. Let it wash over you.

Fun fact: if you go all the way to the bottom of Ovechkin's Twitter feed, you find the tweets from way back in January of 09 when he first joined, before he left the site for a long time. Hilariously, these early tweets all have much better grammar and punctuation than his modern tweets, which means they were probably written for him by some NHL media guy.

The world is a much better place now that Alex Ovechkin runs his own Twitter.