Logan Couture has been watching the show Sons of Anarchy.

I think you all know what that means.

Which Sharks Players are Most Like Which Sons of Anarchy Characters?

(Warning: Sons of Anarchy is a great show, and this post will probably contain some spoilers, though I will do my best to keep them to a minimum. To be safe you should probably go watch all three seasons and then come back and read this. I'll wait.) 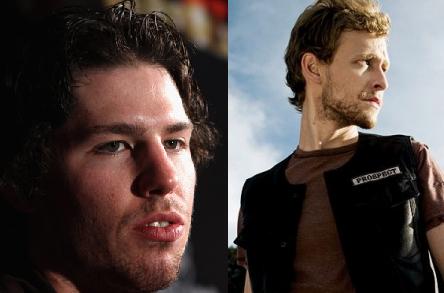 Both are young, fun-loving guys still working to make their mark in the world. Both have demonstrated surprising resilience and talent, and you can count on Couture or Half-Sack to step up when they are needed.

Also Logan Couture only has one testicle, so that's another thing the two have in common (this joke was made against the advice of BoC Legal. It is only intended as satire. I actually have no idea how many testicles Logan Couture has).

Keep you fingers crossed that Logan's story has more of a happy ending than Half-Sack's.

Both guys are big lumbering brutes that will totally wreck you if you get in their way.

Both Opie and Murray have had to overcome great tragedies (in Opie's case a tragic death in the family, in Murray's case being called "Doug") to rise to where they are today. 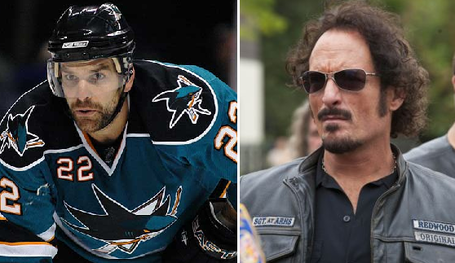 Both are grizzled veterans who are willing to do whatever is necessary to help their teams.

They also both score a lot and have horrible blood-soaked events in their pasts.

Finally, sometimes they both screw up really bad when shooting and end up causing a lot of trouble.

Both Patrick and Chucky also have cool leather gloves that they wear all the time.

There are actually several good fits for Juice on the Sharks, but in the end I think Burns is the best choice. Both guys are young and have had some problems in the past, but they're undeniable assets to their teams - as well as delightful comic relief!

Also both guys have nerdy hobbies (reptiles and hacking).

It's not widely known, but Handzus does a killer Elvis impression.

These guys don't talk much, but when you need them they're more than willing to kill the hell out of people.

Both dudes are tough bastards who don't care what they have to do to get the job done.

They look pretty similar too, so that's a bonus. 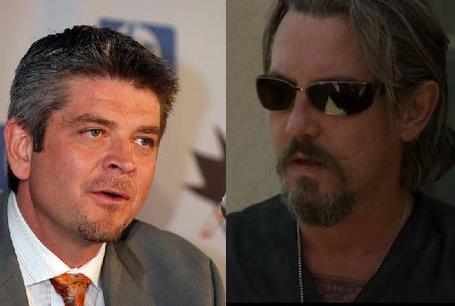 Older guys who have been through wars in the past. Their teams look to them for wisdom and guidance, and they usually deliver. 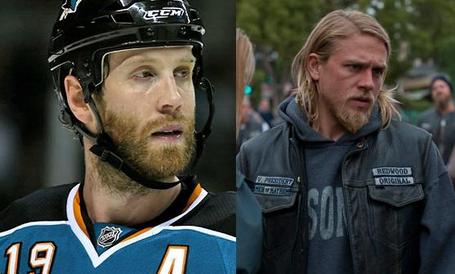 Both guys are young leaders looking to prove themselves. They've both accomplished a lot already in their lives, but questions remain about how ready they are to take the next step.

The future of the Sharks and the Sons depends on Joe and Jax.

That's all for the Sharks - how about guys on other teams? 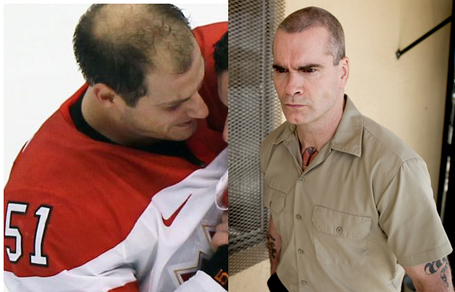 Because both guys hate minorities.

Alec Martinez is All of the Mayans

Because the NHL hates minorities.

Nobody is Clay Morrow 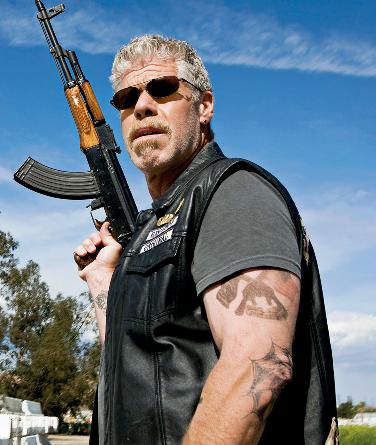 Because nobody is cool enough to even be mentioned in the same sentence as Ron Perlman.