Sleektooned Blog Logos 4: Are we there yet?

Share All sharing options for: Sleektooned Blog Logos 4: Are we there yet?

In case you missed it, I'm doing a late-summer project that involves Sleektooning other SBN hockey blogs' logos.  I must say, so far results have been pretty excellent.  Earlier chapters:

I've been a bit swamped this week, so I've decided to post logo designs for only two blogs this morning (though one has two versions to choose from). I feel like this challenge is getting tougher as I go along -- though it may not be apparent from the output I'm producing, there are a lot more drafts and re-designs being drawn and discarded than I'm used to -- apparently I don't like half-assing so much under other blogs' names.  Also, some of these are turning into real creative challenges, as I try to stay somewhat original and yet try to capture some spirit of the team.

Today's theme isn't originality, though; rather all of today's designs involve some artistic plagiarism, modified to suit each blog.  I like to think of it as a cartoonist's tribute, but I'm sure lawyers have a much more dickish way of looking at things.  As such, these really have low probability to become actual logos, but whatever -- two more blogs off the list! :)

First off today is Hockey Wilderness, SBN's Minnesota Wild blog.  I've actually had some success in the past at creating a cartoon version of the Wild logo -- it is a pretty fun challenge to work with, and the BoC Legal Team probably wishes I went with one of those drawings.  Instead I took inspiration from an old altered Wild logo I once made, except this time I drew it by hand: 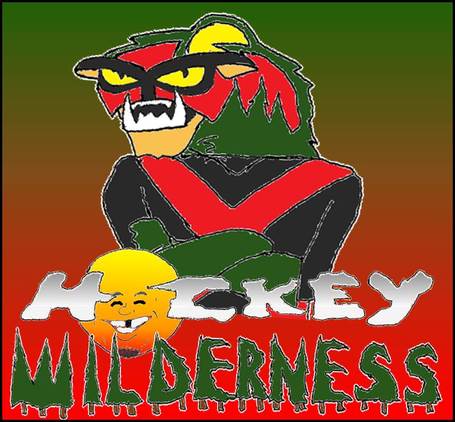 There's some good and some bad in this design.  I was determined to spell out the blog name using some sort of clouds-and-trees lettering, and that mostly works.  Putting the smiley face on the sun might be a bit of a lost joke, though -- that's supposed to be Dany Heatley's gap-toothed grin.  The Wild-Brak-combination looks pretty good, though if I were more dedicated I'd redraw it and attach his head a bit better to his torso.

Not perfect, but it's a solid gag that's decently charming -- publishable!

Two more logo designs for another blog after the jump!  Which blog might it be?

The next two designs are dedicated to the Cup Champions: Stanley Cup of Chowder.  They don't get two designs because the Boston Bruins won the cup, though -- I just wasn't quite sure how to finish off my sight gag.

As a cartoonist, the Bruins are one team I wish played in the western conference -- drawing bears has been funny for decades, and I just don't get enough opportunity to practice it with the one or two meetings a season (I did get some drawings in for the Cup Finals, though).  And while I could have picked a lot of directions for this design, I was determined to draw a classic Yogi Bear scene.  Instead of stealing a picnic basket, he'd have snagged a Stanley Cup of chowder.  Instead of running from a park ranger, he'd be running from a Vancouver Canuck -- how topical!

My Yogi Bear turned out good enough to use twice -- I'm just not sure which design best represented the pursuing park ranger / Canuck.  I'll leave it up to the reader to decide: 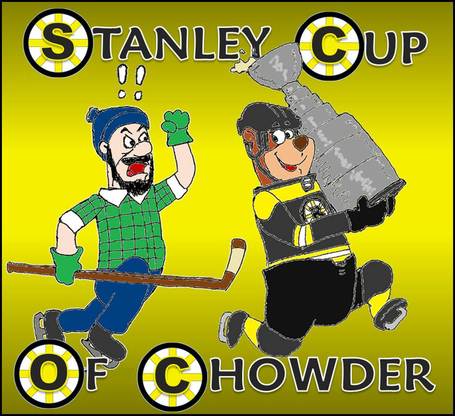 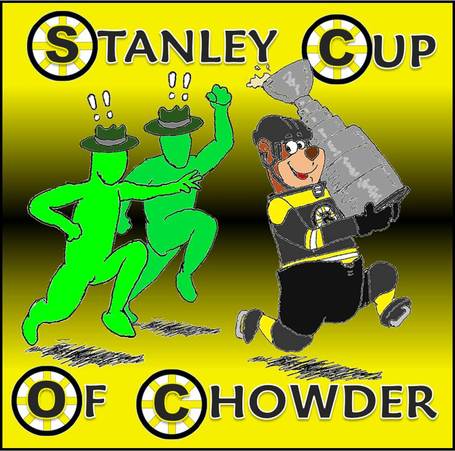 It's way minor, but one thing I am a bit disappointed in is that I copped out and used computer text instead of hand-drawn text; that's the first time that's happened in this series of logos.  I did draw out letters for this, twice, but just couldn't make it look very good.  But hey -- it's a long series, and I'm bound to cut corners.

So yeah, it's only two blogs today, but I continue to like them; I think the series is still holding pretty strong.  Which has been your favorite of all the designs so far?

Oh yeah, in actual hockey news, Ducks are having training camp this weekend.  I wrote up a short "camp battles" piece for RLD Hockey that was so compelling that it ran first alphabetically -- check it out if you care.  I can't attend this weekend's sessions, but I might attend Monday morning -- anybody else going?