Share All sharing options for: Ducks Preseason -- Correction: Let's NOT try this again.

That's actually what I wrote a year ago in a post called "Let's try this again, shall we?", when the Ducks once again started their preseason with some miserable results.  I really should have been clearer with my post title, though -- I didn't mean let's literally try it again, you jerks!

This year results are slightly different, though -- the Ducks have won their last two games somewhat convincingly; at least in those two games the lopsided shot totals reflected an opponent trying to come back in the latter half of a game.  But still -- we know that last year's rotten preseason shooting metrics led to a rotten start of the season; can the Ducks find a way this year to avoid that same trend?

We shall see.  Part of their fate will depend on who makes the team among the bottom-six forwards.  If there's some decent level of competence below the Getzlaf and Koivu lines, that could go a long way towards righting the Ducks' ship before Jonas Hiller loses his mind.

After the jump, a player-by-player look at the bottom-six contenders, including thoughts on some of the forwards who have been cut.  I'll warn you now -- I spent more time formatting tables than I did writing!  :)

Still in contention (in no particular order):

Potential nicknames: Cogs, Glee.  Cogliano has had a very strong preseason, and it'll be exciting to see what he can bring to the Ducks' bottom six.  He'll bring speed for sure, and that's been most impressive to me in transition when teammates need a passing option -- Cogliano gets available fast.  He's a bit spastic in the offensive zone, though, sometimes skating the puck straight at a teammate, but that may be overexuberance -- he still does have a strong skillset.  There's an outside shot that Cogliano works his way into the top six, but otherwise it'll be him plus five other dudes who make up the bottom six forwards.  If Cogs stays strong in the faceoff circle like he did last game, he may stay a center, but I don't mind him on the wing.

Potential nicknames: Mad Max Mac, with one of those to be dropped later.  I don't know very much about Macenauer, but a couple of times I wanted to check and see who had won a clean faceoff and it very often turned out to be Macenauer.  He's another quick-skating option for the Ducks, if they want to work on their speed element.  Faceoffs and penalty killing seem to have been his strengths in the preseason, which is the right combination to crack the Ducks' lineup, it seems -- it's Todd Marchant that need replacing, after all.

Potential nicknames: Commissioner Gordon, Gordon Bombay.  I've only seen Andrew Gordon play in three games, including the Ducks' scrimmage, and he's scored a goal in every game.  That's a good way to impress -- it's been a good camp for the small winger.  He's smart and puck-hungry, and I haven't seen any real flaws yet.  That's a lot of PK time he's been seeing, another useful sign for his big-club hopes.

Potential nicknames: Maroon 5, Whatta Maroon.  I barely know anything about Pat Maroon, other than he was some sort of reclamation project when the Ducks traded for him.  He's a large body with some shooting sense about him -- with so many smaller players in the bottom-six hunt, he definitely has an edge there.  Not sure why he's seen so little preseason playing time, though -- he may not be a real contender yet.

Potential nicknames: DSP, The Hyphen.  I wasn't too fond of Smith-Pelly the day I went to training camp -- he seemed to make some poor puck decisions and wasn't very effective.  But in the last two preseason games, he's been a lot better.  He's 19, same draft class as Cam Fowler, so I'm not sure how much a rush the Ducks are to promote him, but he definitely could be a useful bottom-sixer.  Smith-Pelly reminds me a bit of Travis Moen -- not fluid or anything, but he outbodies a lot of people and does a lot of right things with the puck.  Also good to see him putting in some PK time.

Nickname: Bacon McMuffin.  McMuffin to me seems a shoo-in for the bottom six; his hard-working play last season should cement him in the lineup.  But his preseason has been a little awful so far; pointless and pretty bad in the faceoff circle to boot.  Still, Bacon is one smart McMuffin and his versatility should find him a regular spot in the lineup.

Nickname: The Hound of Belekseyville.  Not sure where Matt Beleskey stands these days -- he's still not back from offseason surgery, but I don't think he's that far away.  His last season was a bit marred by injuries as well.  At his best, Beleskey is a guy who can be inserted in Bobby Ryan's spot on the top line, helping spread scoring in that regard.  But there's been a lot of times when he's struggled to be a useful NHLer, too, so he remains a bit of a wildcard.

Three guys listed here -- whoever is healthy and not suspended at any given time will be dressed.  And depending on Carlyle's mood, perhaps two of them.

Nickname: Stache, The Stache, Moustache.  Parros does enough on and off the ice for the Ducks that he'll play over the other two options whenever available -- he's got nothing really to prove this preaseason.  He actually looked pretty good as a hockey forward in the preseason game against Vancouver (except of course for that ridiculous goalie interference), but that was against an AHL lineup, mostly.  But any hockey from George is a bonus; in a fully-healthy lineup he dresses for sure.

Potential nicknames: McGoon.  I don't know how much I believe it, but I have heard some good things about what McGrattan did for the Syracuse Crunch late last season -- leadership and stuff.  If it's true, that probably is his role again this season, unless Carlyle wants two fighters and Jacques is suspended.  He seems to have knocked Westgarth out of the lineup in his one fight this preaseason, so there's no questioning his ability to punch.

Potential nicknames: Absurdly French, JFJ.  His names are redundantly French, and his skillset is redundant with Parros and McGrattan as well.  But hey, the more the merrier, I guess -- there will be no need to sign an enforcer Ray-Emery-style at any point this year.  Jacques earned the Ducks' first official Brendan Shanahan suspension -- 1 game for assaulting a Canucks player [EDIT -- whoa, I mean the rest of the preseason plus five regular season games] -- but not sure if the team looks at that as a bad thing.  He's a certified thug.

Here's a quick takeaway on some of the depth forwards who have already been reassigned.  But first, a quick cartoon -- can't write this much text without offering something for the eyeballs.  :) 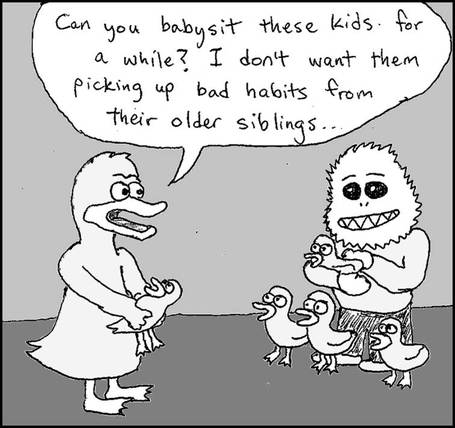 Here's the guys who didn't make it, but don't fret, prospects!  At the rate Darth Shanahan is suspending players these days, I expect some of these guys to substitute in for part of the year at least.  :)

Potential nicknames: Irish, Kyle Paulmara.  It was a pretty good showing for the Notre Dame kid, but unfortunately for him, the Ducks didn't have any vacancies to fill among the top-six forwards, nor was there much power play time available.  I'm liking the offensive end to Palmieri's game -- he's developing his own brand of Corey Perry stick sense around the net.  But his play in the other two zones could probably use a bit more seasoning, I guess -- no rush yet.

Nickname: El Niño.  Bonino's kind of the opposite -- he seems to excel in the defensive end but then gets more and more lackluster as the play approaches the offensive zone.  Good reach, good awareness, but if he's going to really be a pass-only kind of player, his passes should be better.  The one good thing about Bonino -- he consistently doesn't pick up points at the NHL level, but the Ducks do seem to win with some consistency whenever he's inserted.

Potential nicknames: Dutch, Hoolander.  I'm terribly undereducated about who Peter Holland is, but from what I've heard he did start using his size a bit better this preseason.  He did pick up some preseason assists, and seems to shoot the puck -- that's encouraging -- but faceoffs weren't too strong and he wasn't overly remarkable.  But a big center for somewhere down the road.

Nickname: Registered Sex Offender.  Sex Offender had a tough preseason -- for a shoot-first kind of guy, he didn't get a lot of shots on net.  I don't know if he was nervous or something, but he seemed to flub the puck a lot when given opportunities.  Puck rolls off the stick, shot sails way wide -- something kept going wrong whenever he'd shoot.  But it's a small sample -- Sexton can pick it back up in Syracuse.  The bigger problem was that there were lots of people showing up to training camp with Sexton's skillset, plus they won faceoffs and killed penalties.  Sex Offender doesn't have the versatility to keep up with that, especially with a mediocre preseason.

Potential nicknames: Emeritus, Sweetem.  Also 19, I liked what I got to see from Etem this preseason, even though it wasn't very much.  He's skilled and works hard, but like Palmieri, he'll be better utilized when the Ducks do have top-six vacancies to fill, I think.  Go future.

So that's my take on what little I've seen of these players -- take it all with ten grains of salt.  But it does seem pretty exciting -- there's some new hats in the ring, and it seems a lot of options for Randy Carlyle to think through.  Whenever he's not thinking about how badly his team is getting outshot, that is.  :)

Feel free to leave your impressions or nickname suggestions in the comments.