Time for another installment on what has become BoC's longest project ever (not counting dressed-up pets).  As usual, I'm a bit too apologetic on these -- this batch came out looking fine, but of course these logos could have probably used one more draft each.  Oh well!  :)

First off today we have The Cannon, SBN's Columbus Blue Jackets blog.  Now I've never had much luck cartooning a blue jacket character -- whether it's a bee, a Civil War soldier, an actual blue jacket -- none of it really draws or connects to the team very well.  But fortunately enough the blog title narrowed things down for me; I just added the helmeted head of Rick Nash to "hockey" it up a tad... 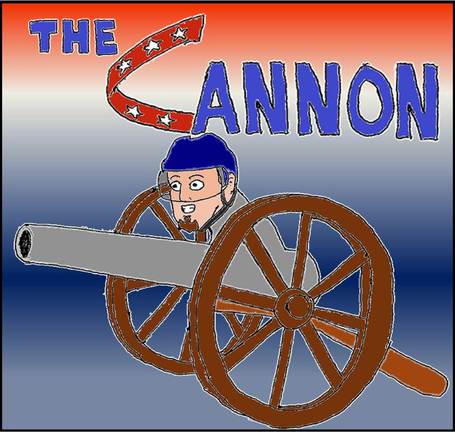 It works -- nothing spectacularly great, nothing outrageously wrong, plus the "C" lettering comes off pretty strong.  And the Rick Nash head is decent -- I'll take it!

Next up is On The Forecheck, our Nashville Predators blog.  For this one I didn't do anything too outrageous -- basically just added Shea Weber's playoff beard to a sabretoothed hockey-blog-reader.  The result works out pretty well, though I'm a little irritated in that I drew a really good Weber beard on my first attempt but haven't been able to improve on it since.  Anyways... 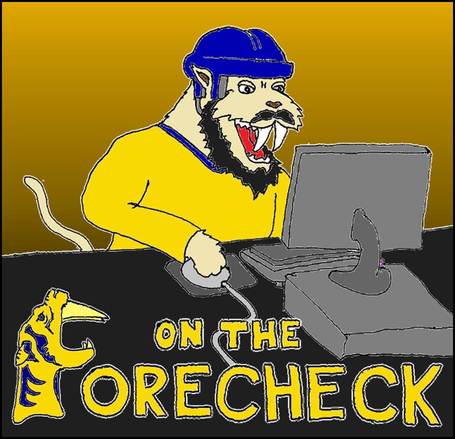 It was important to me to put the Predator on a computer in this logo -- not only does it does imply blog reading, but it also signifies all the solid number-crunching Dirk does over at OTF.  In my mind's eye the Predator's not reading a hockey blog in the cartoon, instead he's laughing at somebody's Corsi relative to their QUALCOMP.  Ha!

The best part of the logo is probably the letter "F", though -- that conveys a bit more solidly that you're at a Predators blog.  Grawr!

One more blog logo after the jump!  Which hockey blog might it be?

Staying within the Central Division (at least until the league tears it up next summer), last up today is Second City Hockey, the Chicago Blackhawks blog.  Coming up with an idea for this one was a bit nuts -- at first I wanted to do a picture of Jonathan Toews and Patrick Kane as Blues Brothers, since that is pretty Chicago and it did feature two alumni from the Second City Chicago comedy troupe -- John Belushi and Dan Aykroyd.  And while there were enough connections there that it might have worked out, I couldn't resolve the fact that Blues Brothers was an SNL skit and not a Second City skit -- that technicality eventually soured me on the entire idea.

But you know what?  I'm sort of glad that first design idea ran into a dead end.  I probably could have drawn an okay Toews and Kane with sunglasses and hats, but it wouldn't have looked that obvious who was who.  I think I did a much better job drawing those two young hockey stars sporting some good ol' Blackhawk war paint... 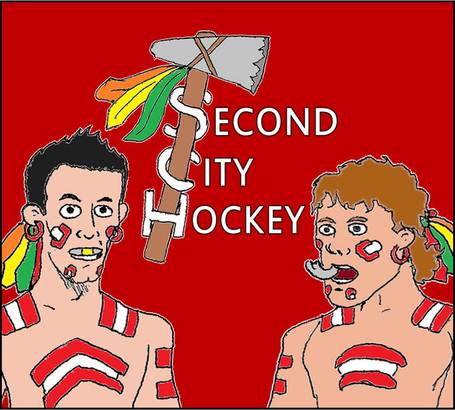 The drawings are pretty good -- thank goodness for Toews' gold-front-teeth mouthguard and Kane's inability to keep his inside of his mouth.  I wasn't quite sure how to apply the Blackhawks' facial paint design to the shoulder and chest, so that looks a little sloppy, but it conveys what I was going for, at least.  And, like the other two designs, it has a pretty strong blog title presentation -- I like the tomahawk effect in the lettering.

Woo hoo!  Three more blogs off the list!  As always, feel free to share your opinion on any of them.

On a side note: I'll be heading out of town tomorrow morning for a few days; from tomorrow through Tuesday it will be mobile-only for me.  Try not to get into too much trouble, and when I return, holy October!  The season will be nearly upon us.