Share All sharing options for: Sleektooned Blog Logos 3: Now it's a Trilogy!

(Author's note: Yeah, this is "too soon", but I'm offering these distractions anyways.  Besides, this batch of logo designs was already drawn and uploaded, and by the time this post publishes, I'll be well on my way to sunny Illinois anyways!  See ya, suckers!)

So I've developed a bit of a late-summer project re-designing other sites' blog logos (occasionally even by request!), and I've got three more designs to share today.  I'll warn you, though -- the bar was set pretty high in Part 1 and Part 2.  I'm not disappointed in any of today's efforts or anything, but each drawing has its own flaw -- if I weren't doing so many of these, I'd fix 'em, but for now they're good enough for concept pieces, probably not actual logos.  And besides, none of the three today are solicited, so whatever!  :)

First I had to take a stab at In Lou We Trust, SBN's New Jersey Devils blog.  I figured that Lou Lamoriello was so caricature-ish in person that it would be pretty easy to draw him into a Devils logo.  But that proved pretty difficult, actually -- it took me a solid ten tries to draw a good Lou, and on principle I generally don't try anything ten times!  But it paid off -- Lou looks awesome.  His evil eyes and crafty grin almost jump out of the picture at you -- you know he's about to circumvent the cap somehow!  I also like incorporating some Devils-script into the blog name, though that took a bit of trial-and-error, too. 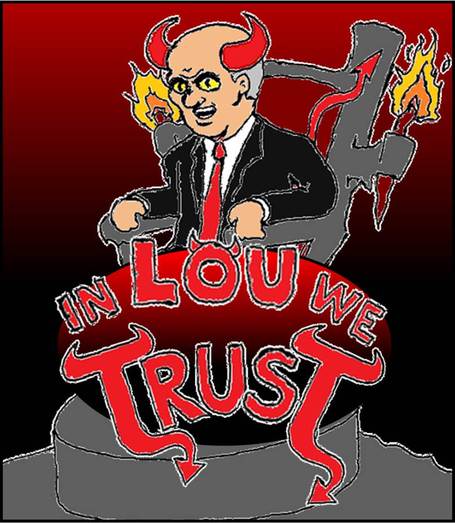 The Flaw: I got so excited once I drew a good Lou that I skimped on what was supposed to be a terrifying devil's throne.  But hey -- it's got some torches or something. :)  Also, there's a bit too much red-on-red in the text; it doesn't read very cleanly.

Overall, though, I like it.  A-minus, almost entirely carried by Lou's grin.

Next up is SBN's Calgary Flames blog, Matchsticks and Gasoline.  Though the idea of "flames" is fairly easy to draw, working in the blog title was intriguing -- how to incorporate both matchsticks and gasoline in the picture while keeping them in the proper reading order.  I think my concept works pretty well -- though I had my doubts thinking how it ought to come together, it has the right elements in the right order, plus the suggestion that arson is imminent.  I probably didn't emphasize it enough color-wise, but I like how the lit match has the "&" sign in it -- better than sticking a nonsense label on that gas can.  And the thumb in front of the gas can allows for the perspective element to work, I think. 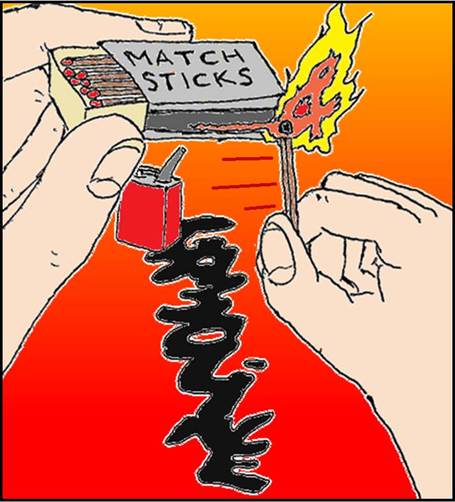 The Flaw: Once again, legibility is sort of a problem.  But on a more egregious scale, look at the crazy size discrepancy between the left and right hand!  Ahhh!  I've developed a bit of a backstory to this logo that helps me cope with that, though -- now it's a picture of a bonding parent taking his kid out for his first taste of arson: "Now light the match, son!"  Awww.

I'm pretty happy with this one.  B-plus, thanks to the backstory!

One more flawed design after the jump!

Last on today's tour is Defending Big D, SBN's Dallas Stars blog.  This one took some creativity, as there's really not that many ways to draw a star and even fewer ways to draw the letter "D".  Concept-wise, the scope of possibilities seems pretty limited.

Unless you're a Star Wars nerd like me, that is!  This design is definitely stretching it, but there's some elements that do sort of work: everything in the picture is defending a big D (including a deflector shield I worked quite a bit on!), there's a general green-and-black color scheme at work, and it does remind us that just like the Galactic Empire, the Dallas Stars are the embodiment of pure evil.  :) 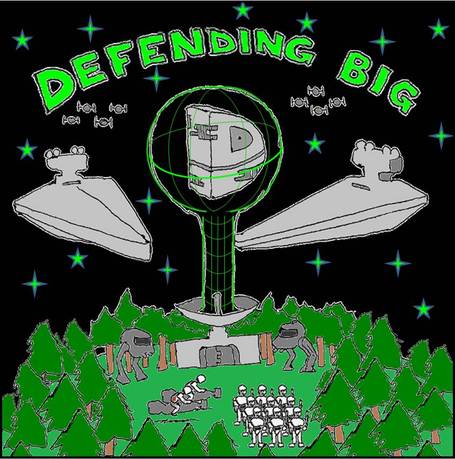 The Flaw: Lawsuits (though I wonder a little -- I didn't draw anything THAT well), and overall concept.   None of it says "hockey", and even though I dropped a few green stars in the background, none of it says "Dallas Stars", either.

But I feel all right about it, just like Stars fans should feel good about their team's ability to defe-- oh shit, an Ewok stole my speeder bike!

I'll give it a B.  Star Wars scores enough points to offset any irrelevance to the Stars themselves.

Feel free to grade these logos or any previous designs, or just make fun of the fact that I'm on my way to Peoria.  Because I'm on the road, the logo project is on hiatus for a few days -- then we'll see what sort of Teemu news I'll be forced to "report" on next week.  :)  But this series ain't over -- more to come, I'm sure.