Share All sharing options for: The Top 5 Ilya Bryzgalov Tweets

We've already covered the genius that is Alex Ovechkin's Twitter account, but in recent weeks another player from that ice-bound nation has rocketed to the top of the hockey Twitter world: Ilya Bryzgalov.

Those of us who have known and loved Ilya since his time in California aren't surprised that he's a funny guy, but even his famous interviews couldn't prepare us for the comedy gold he is tweeting on a regular basis.

As with Ovechkin, the language barrier often makes it difficult to know if Bryzgalov is being serious or is intentionally joking with these tweets - and that ambiguity makes them all the funnier.

Ilya's first-ever tweet was a strong one, packing three exclamation points and making his own last name a hashtag. Everything becomes extra-charming when you realize that Ilya hasn't ever changed the default font, colors, or wallpaper for his Twitter account. Clearly he's far too busy looking at historical chairs to be bothered with all that. Speaking of which... 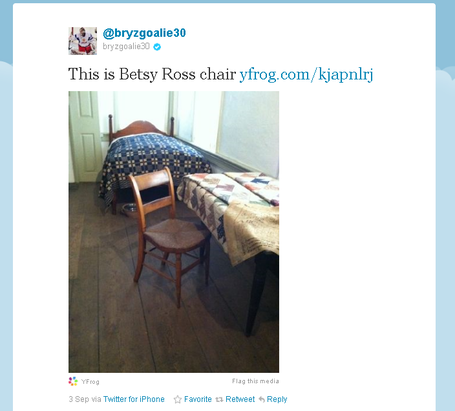 Ilya's trip to the Betsy Ross House was one of the best things to ever happen in the history of the world. He tweeted repeatedly during his visit (shouldn't he have been paying attention?), and shared several pictures with us, including this one of "Betsy Ross chair."

Seriously, say this tweet out loud with Ilya's accent and try not to smile. "This is Betsy Ross chair." Now think about him out with his kids, getting out his iPhone and snapping a picture of this chair to send out to the world...it's magical.

(for the non-Twitter savvy, remember to read the bottom tweet first)

I'm not sure what the deal is with the ")))" here. I think it's a Russian thing. He does it a lot, and it seems to indicate laughter or something.

Ilya was seriously blown away by this dog. If anyone ever needs to distract him during a playoff game they should just hold up a picture of a dog crossing the street and Bryzgalov will lose his mind. 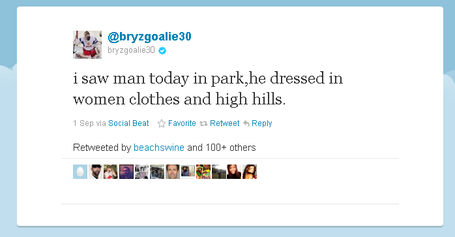 Bryzgalov has all sorts of adventures.

After Ilya retires, someone needs to give him a travel TV show where he goes around to famous historical places, takes pictures, and comments on stuff. I'm not joking - I would never miss an episode.

Rudy and I already did some brainstorming for "Bryz's Vacations" on Twitter:

This how Liberty Bell get crack America. #bryztweets

This Golden Gate bridge. Very nice must be expensive #bryztweets 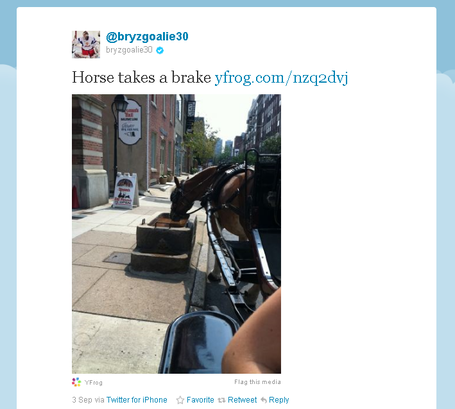