A few days ago, I e-mailed blogging superstar Derek Zona the following:

Zona wrote back that he didn't know what the fuck but over the next few days he did e-mail me a few interesting tidbits about Penner. Like the following:

For some reason, Penner has been averaging shots from really far out this season. If I had to guess, I'd say it's not so much that he's shooting from farther out as it is he's not getting shots from in close to help bring those numbers down. Penner seems like he'll throw the puck on net if he doesn't have a passing lane, which accounts for the farther shots out, but then he's not getting set up in tight to get rebounds and tips that will bring his shot distance down. That's something he's corrected in his last few games, at least, as he's been driving the net a lot more. Hopefully that holds.

Also, something else weird that Derek found:

Shot distance when Jarret Stoll is on the ice: ~38 feet

Shot distance when Jarret Stoll isn't on the ice: ~28 feet

Does the fact that Stoll doesn't really handle the puck when entering the zone as a center force Penner to create from farther out? I have no idea. It might not mean anything! It might mean everything! Who knows! EVERYTHING IS CHAOS.

Zona followed up with this e-mail yesterday:

So, just to sum up: Penner is shooting less, his shots are coming from farther away, and, on top of all that, he has poor shooting luck.

Other than that, he's doing fine?

Read this post from Mayor's Manor. Penner addresses Pancake-gate and offers an exciting opportunity. A taste:

First and foremost, I think we can agree that having delicious pancakes that your wife made for breakfast, for a 1pm game, is not out of the norm. Secondly, "SOBS" (Sudden Onset Back Spasms) can occur at any moment, doing just about anything you can think of, and is a very serious issue.

Those who have experienced "SOBS," know it is no laughing matter. I'm a little hurt, to tell you the truth, that the plight of my people isn't being taken seriously.

The whole thing is amazing, you should read it.

Hey that Jonathan Quick guy is good. A few things, though:

Even Strength Save Percentage

OK, that's not too egregious. Quick will probably fall a little bit and end in the .925-.930 range and that's still have a really good year. Or maybe he's legitimately getting better, which wouldn't be all that surprising since he's only 25. That's not the thing about his numbers that worries me. This is:

Quick is getting incredibly lucky when the Kings are killing penalties. That's probably going to fall. If Quick had his average penalty kill save percentage this season, he'd have allowed 10 more goals on the power play. Luckily, penalty kill save percentage is so random that there's a chance it stays up all season. Then it corrects like a mother fucker next season and the Kings sign Quick for cheap as a result! Hooray!

So is Quick going to start off really hot and then fade as the season progresses while Bernier does the opposite every season? Because instead they should, you know, play well all the time. It's so obvious!

That's 100% true and it's honestly refreshing to see someone actually choose the most valuable player rather than the best forward... but I'm more excited by the fact that someone finally recognized that Dave Bolland is Chicago's shutdown center, not Jonathan Toews. I swear to God if I see one more person throw Toews's name into the ring for the Selke and then immediately reference his faceoff percentage I'll

(He also gives Kopitar an honorable mention for the Selke. I swear it's like Zona is trying to seduce me or something. Weirdest part? It's working.)

Matt Greene has averaged about 2 minutes more in Darryl Sutter's first 10 games than he did in Terry Murray's last 10. He has been playing better under Sutter.

Jack Johnson has averaged about 2 minutes less. He has also been playing better under Sutter.

I just wanted to point something out from Washington's first goal against the Kings. So the Kings have the puck in Washington's zone and then Mike Knuble gathers the puck and tries to break it out. Knuble has the puck and right above him is Dustin Brown, who has turned and cycled back to cover for Doughty breaking in. 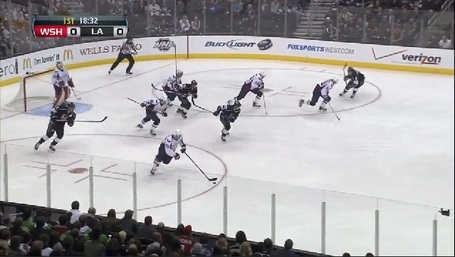 The Caps have a possible 2-on-1 I guess but the Kings are fine because all Dustin Brown has to do is beat Knuble down the ice and there's no fucking way Dustin Brown loses a footrace with Mike "I'm 39 years old" Knuble, right? ...Right? 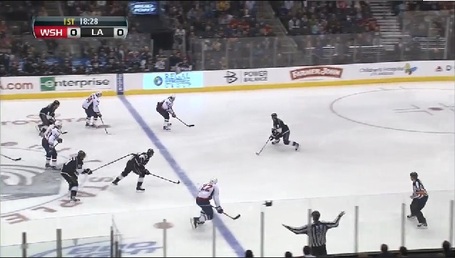 It was a really bizarre play by Brown. Knuble passed the puck and took maybe 3 hard strides and he suddenly had 5 feet on Brown, who was busy looking at Marcus Johansson and didn't notice. By the time Brown realized that he needed to pick it up, it was too late. It's interesting to see the breakdown: Scuderi anticipates Brown getting back and shades over to Johansson, thus making him surprised that he's suddenly playing a 2-on-1; meanwhile, Bernier is anticipating Scuderi challenging the shooter, thus making him surprised that Johansson is getting a shot off unchallenged. It's kind of a shitty goal and ordinarily I'd expect Bernier to stop that one but in this case I think it all started with Brown.

(I like Kopitar realized Brown was falling behind and tried to propel him forward with his stick. That Kopi, so helpful.)

Prediction: Kings win, 5-2. It happened once, maybe it can happen again? Maybe?