Here's my report on a new series of wines inspired by NHL teams:

Los Angeles Kings wine: I thought this was going to be good but I ended up sending it back. It was all corky.

San Jose Sharks wine: Starts off fresh and bold but ends on a bitter note. 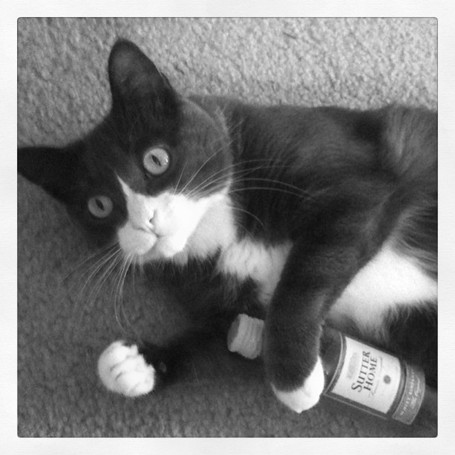 Pittsburgh Penguins wine: This wine would be really good if the grapes weren't always damaged.

Detroit Red Wings wine: Tastes like, and is, malt liquor.

Vancouver Canucks whine: "We're not even tough why do people hate us?"

Boston Bruins wine: Sold in a solid gold bottle, tastes like piss and glory, and is called "Hubris."

New York Islanders wine: I didn't get a chance to try this one because Rick DiPietro broke all the bottles.

New Jersey Devils wine: It tastes pretty good I guess but it costs $1000 a bottle.

Minnesota Wild wine: For this wine they don't press the grapes, they just wait and allow them to regress to the mean.

Washington Capitals wine: The key flavor in this Russian wine falls flat. The result is disastrous.

Buffalo Sabres wine: This wine doesn't age well, and has gotten very bitter since its peak in 1999.

Montreal Canadiens wine: A distinctive mixture of citrus and sweet flavors with a strong aroma, this wine - I'm sorry, I won't get a chance to complete this joke. I've just been informed that I've been traded to Matchsticks and Gasoline.

Edmonton Oilers wine: Far too immature to be taken seriously.

Prediction: You don't understand my plight.

Thanks for Rudy for help with this post. He is the Jack to my Miles.