Share All sharing options for: Sharks Gameday: San Jose vs. the World

Scott Pilgrim vs. the World is my 39th-favorite movie of all time. It's also a great analogy for the battle for the Stanley Cup.

The San Jose Sharks are Scott Pilgrim, our hero. Standing against them are the other top teams in the league, which San Jose must prepare to defeat if they hope to win it all this year. 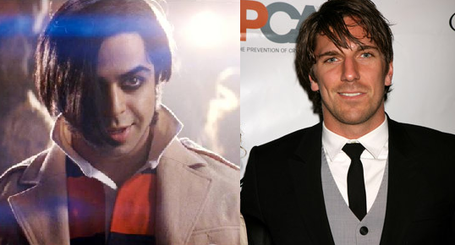 "Didn't you get my e-mail explaining the situation?"

The Rangers are Matthew Patel because apparently they are amazing and can throw fireballs and stuff, but it would be really weird if they had more than a minor role in the Stanley Cup playoff movie.

Honestly it feels odd to even include the Rangers in this list, but the stats can't be denied. New York has the best point percentage and goals against average in the league. They have nicely balanced scoring but aren't really exceptional in any statistical area other than goaltending, so clearly the team lives and dies with the success of Henrik Lundqvist. So far this season that has been working out pretty well for them.

Can the Rangers keep it up? Maybe not. The team's leading scorer is Marian "Glass Groin" Gaborik, and if you mention the Stanley Cup around their coach he'll just swear at you. The Rangers are a definite force this season in a way they haven't been for years, but they're also the only team on this list that averages fewer than 30 shots per game.

In order to defeat the Rangers San Jose needs to find a way to eliminate Henrik Lundqvist. And since Lundqvist is god damn amazing it might be best to hire some thugs to kidnap him or something, because that's probably easier than scoring goals against him.

"You really think you can stand a chance against an A-lister, bro?"

The Red Wings are Lucas Lee because they're rich and famous and successful - but ultimately they'll just do something stupid and then they'll stop bothering people.

Yeah, we get it Red Wings: you're good. Really though, this whole act is getting old. You've been good for as long as I've been alive. It's not fair. Detroit sits comfortably in the top five of just about every statistic there is: wins, point percentage, goals per game, goals against per game, 5 on 5 scoring, shots for and against...the list goes on. They're amazing.

So is there any reason the Wings WON'T win? Sure. His name is Jimmy Howard.

Right now Jimmy Howard is playing exceptionally well - and I do mean exceptionally. It's an exception. His current GAA is 1.98. His career-best GAA as a starter was 2.26 two years ago. Last year he posted a 2.79. He's good, sure - but he's not as good as he is playing right now.

Howard's not the whole story, of course. The Red Wings made a few additions to their line-up in the off-season, and Datsyuk and Lidstrom continue to be outstanding, but the Wings haven't been good enough to win it all for a few years now. This year isn't any different.

And honestly, after all the success they have had over the years, it's nice to watch them lose for a change.

"We have unfinished business, I and he."

The Blackhawks are Todd Ingram because they have magical psychic vegan powers (note to self: before publishing this article make sure to fix this metaphor so it makes sense).

The Blackhawks are good again. After sleepwalking through last season and barely making the playoffs the Blackhawks seem to have gotten things straightened out so far this year. They are near the league lead in points, fifth in shots per game, and third in goals per game. They've kept the pressure on Detroit all season long in the ultra-competitive Central division (the new best division in hockey) and would currently be in first place in any other division except for the Atlantic.

And, somehow, the Blackhawks have been doing this well despite not having a goalie on their roster. I was unable to look this fact up (damn you SOPA!) but that's the only explanation I can think of for why the team's GAA is a massive 2.83. I applaud Chicago for their bold and innovative strategy of playing every game with their goalie pulled.

Long story short, the Sharks can beat the Blackhawks by using psychic trickery to make Patrick Kane drink some half-and-half. Or by, you know, shooting the puck towards the open net a few times. That would probably work.

The Blues are represented by Roxy Richter because they're an unknown, confusing opponent.

The Blues are good? Like, really really good? Oh crap, what the hell do we do? They've seemingly come out of nowhere and they don't have any stars. Jason Arnott is still playing? And he's the team's third-leading scorer? And the team ISN'T terrible?

The Blues are great at protecting their net, and it shows. They have the lowest shots against per game in the league. They split their goalie starts between Jaroslav Halak, a good goaltender, and Brian Elliott, a terrible goaltender, and BOTH GUYS HAVE GREAT STATS. Seriously, go look at Brian Elliott's stats for the past few seasons before this one, and compare them to now; that dude sucks at hockey, and yet the Blues have turned him into an all-star. St. Louis is making a strong argument for the modern "superstar goalies don't matter if you limit shots against" school of thought.

As in Scott Pilgrim's battle against Roxy Richter, the Sharks are going to need some help if they want to beat the Blues. Somebody call up Owen Nolan and tell him to wash the deer blood off his hands. He has work to do.

"They tore the roof off!"

The Vancouver Canucks are the Katayanagi Twins because I'm lazy.

The Canucks are 8th in point percentage, 5th in goals per game, 7th in goals against, and 6th in 5 on 5 scoring. They're well-rounded but not dominating like they were last year (although they still kick butt on the power play). Maybe in some way it's actually better for Vancouver to be a bit behind last year's breakneck pace? If you recall, in the 10-11 season the Canucks led the league in points, goals for, and goals against - and yet they lost.

Of all the contenders for the Cup, the Canucks are the only ones where the biggest question marks fall in the category of "intangibles." Are they tough enough for the playoffs? Can they stand up for themselves without taking stupid penalties? Does Roberto Luongo have a good enough therapist? Like much of the rest of the league I hope and believe the answer to all these questions is: 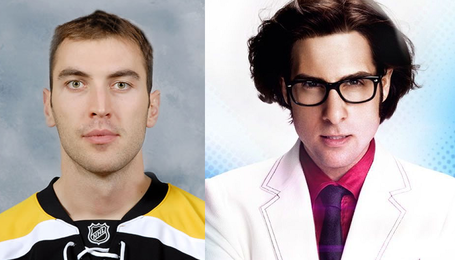 "Well, if my cathedral of cutting-edge taste holds no interest for your tragically Canadian sensibilities, then I shall be forced to grant you a swift exit from the premises... and a fast entrance into hell!"

The Bruins are Gideon because they're the champions. They're the end boss. The road to the Cup goes through them.

The Bruins have proven their Cup-worthiness HARD this year, and currently rank 2nd in points percentage. They are scoring a ridiculous 3.54 goals per game, best in the league by far. Their goals against, provided by the world's spryest 37-year-old Tim Thomas, is a cool 2.02.

Yeah, that will all do just fine.

The Bruins are currently rocking hubris harder than Macbeth in the first nine scenes of act five, yet in all honesty it's hard for me to dislike them for it. Their ancient moustachioed goalie and Zdeno the Slovak Giant are endlessly entertaining, and the way they piss off the Canucks is just magical.

But the Bruins are the enemy, in the end. If the Sharks want to win it all it's very likely they will have to tangle with Boston. The showdown should have happened last year. It should have been Sharks vs. Bruins in the finals. But San Jose fell short, and died.

Luckily, the Sharks had an extra life.

Here's hoping things turn out better this time around.

A Few Other Teams

The Los Angeles Kings are Knives Chau. The Sharks will probably have to deal with them sooner or later.

The Philadelphia Flyers are Envy Adams. Sure they're evil I guess, but they're not the main villain.

The Anaheim Ducks are Crash and the Boys. They get vaporized about 20 minutes into the film.

The Columbus Blue Jackets are Dennis Nedry from Jurassic Park. They're not even in the right movie.