Ducks Gameday -- Howl About That!

Share All sharing options for: Ducks Gameday -- Howl About That!

I probably was a bit too ambitious with today's cartoon tribute -- turns out it's tough to draw a Stimpy without a nose or a duck with one. Because of that, this Sleektoon ended up taking me longer than I expected, but I'm happy enough with the compromised result. 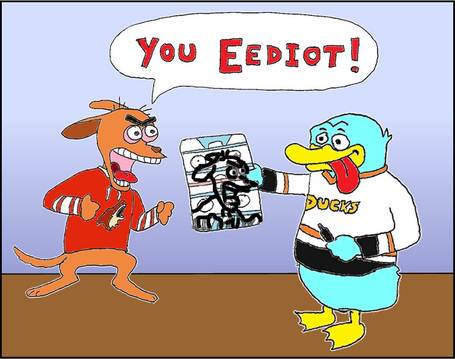 I'll be around for game comments tonight, but for now I'm off to watch more of The Wire! I got the 5-season set as a late Christmas present, and it's really helped fill what would have been a really boring All-Star week off. Fuck you too, McNulty!

Actually, post isn't over yet. A table after the jump!

I'm not really going to add any commentary on this, but I did the legwork, so here it is. Go balance!