Share All sharing options for: BoC Gameday: Chutes and Ladders

The Ducks have already beaten the Sharks three times this year. Counting tonight's game, the teams play each other three more times this season. For the mathophobes out there, this means the Sharks need to beat the Ducks tonight to even have a chance at eventually tying the season series.

After the last time these two teams met I compared the Sharks' troubles with the Ducks this season to a skilled Street Fighter player losing to a button-mashing little kid. I stand by this analogy, but I've also thought of another one: the Sharks are like an adult playing board games with a child who will never play any game other than Chutes and Ladders. The Sharks could easily beat the Ducks at a skill-based board game like Scrabble or Stratego or Trivial Pursuit or Pandemic*, but Chutes and Ladders is nothing but luck, so the Ducks have a chance to win.

* = Actually Pandemic is a cooperative game but I love it so much I wanted to include it here anyway, even though it makes no sense in my analogy. I just like mentioning it whenever I can. Pandemic rules!

So what do the Sharks need to do in order to win tonight? They need to take charge and determine what type of game will be played. 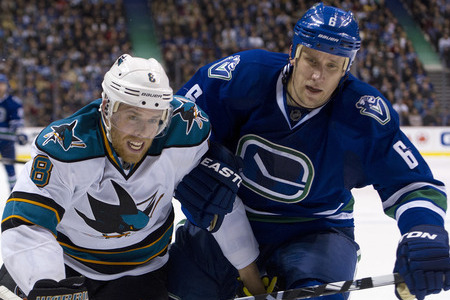 "You go for a man hard enough and fast enough, he don't have time to think about how many's with him; he thinks about himself, and how he might get clear of that wrath that's about to set down on him."

The mission is clear: the Sharks must play their own game against the Ducks.

The problem is also clear: the Sharks have pretty much been doing that in the first three games against the Ducks, and they've still lost. Here, let me show you what I mean:

Megalodon's Taco Bell Keys to Beating the Ducks that Haven't Worked at All so Far this Season:

A big part of the Sharks' success is their shot total. They lead the league in shots per game, so obviously one part of their "game" is to get a lot of shots on net. How has that worked against the Ducks so far this year?

Oh so...okay, the "shoot the puck a lot" thing has been going well for the Sharks.

#2 Stay at even strength

The Sharks have not been doing well on either the power play (16th in the league) or the penalty kill (28th) this season. Until they fix their special-teams issues the Sharks should be looking to keep the game at even strength as much as possible, where they have the 3rd best goal differential in the league.

Everyone knows the Ducks are a bunch of thugs and hooligans, so the Sharks have probably been burned by penalties in the losses against Anaheim, right?

Game 1: 0 powerplay goals in the game.

Game 2: 1 powerplay goal for each team.

Game 3: 0 powerplay goals in the game.

Ah, I see. So I guess special teams aren't the problem after all.

#3 Get contributions from the defense

Now that the Sharks have Brent Burns on the team they have one of the most offensively-talented blue lines in the league. In order for the Sharks to win, they need to get shots and points from the defense.

So what's happened in the games against Anaheim this season?

Game 3: 3 assists, 17 shots from defense, including 8 from Dan Boyle alone.

So the Sharks have actually have been doing a great job "playing their game" against the Ducks this season. They've been getting a lot of shots, avoiding penalty trouble, and getting plenty of offense from the blue line. All three games have been decided by a single goal, so one way of looking at the season series so far is that the Sharks have been playing well and doing what they want to do, they just haven't been getting the lucky breaks necessary to actually get the victories.

Another perspective is that since "playing their game" isn't working for the Sharks they should stop doing that. Perhaps the Sharks should try their hardest to play the Ducks' game against Anaheim. San Jose should shoot a lot less (Anaheim is 30th in the league in shots per game) lose more faceoffs (the Ducks are 29th here) and generally just try to let the other team score more (the Ducks are 27th in GAA).

In order to beat the Ducks, the Sharks must become the Ducks.

In other words, the Sharks need to become much worse at playing hockey.

Prediction: I do not entertain hypotheticals. The world itself is vexing enough.