As is typical of this ever-lazy blogger, I really don't know much about the prize of this year's entry draft, Nail Yakupov, but I have heard plenty the slogan "Fail for Nail". As such, I decided to look a bit at how the race is going for the draft lottery's bottom five, and trust me -- Anaheim's trending very well in these standings.

The table below shows the eight teams currently below .500 and how their home and road records project out for a full 82-game season. I've highlighted tonight's two opponents; you'll note that the Islanders currently have fewer points than the Oilers, but Edmonton's such a horrible road team that they calculate to one fewer standings point by the end of a full schedule. Still, it's a tight race.

By this table's math, it looks like the Blue Jackets have the inside track on Yakupov, but it's certainly not in the bag. Let's not forget, Columbus started its season 0-7-1 but has played .387 hockey since. Anaheim started its season 4-1-0 and has played .273 hockey since (.286 in 14 games under Coach Kirby). If those latter win percentages keep up, the Ducks might end up in prime lottery position with as many as eight standings points to spare. Nail could easily be ours! 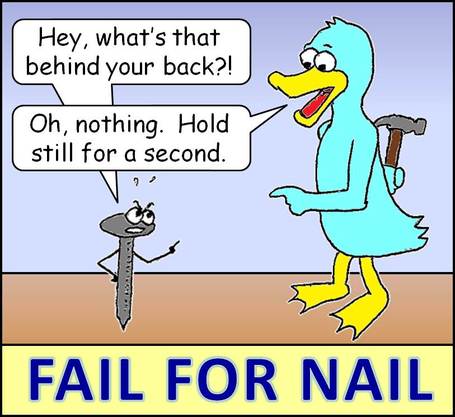 Tonight's game could alter the projected standings a bit, though -- one of these awful teams is guaranteed two points:

So, regardless of outcomes tonight, the Ducks will still sit second in the "Fail For Nail" standings tomorrow morning, but with a regulation loss we'd certainly put some pressure on Columbus! :)

I'm watching tonight's game on DVR delay, so have fun without me -- this game could legitimately go either way, I guess.